For over four years we’ve been doing this now, helping people, signposting them, providing solidarity, compassion, survival guides and food parcels. You’d think that things would be getting better, that I would no longer need to write this blog, to hold the demos but the need has never been greater than it is now.

I’m often told by people that they wished that they could do something like we do, and I tell them how to do it. It’s tough going but not impossible, far from it. We do need more support, more demos. Don’t forget folks that I’m a single parent on a very low income just trying to do my best and it’s tough, but no way near as hard as the daily reality of life is for most of the people that I speak to.

Today was freezing, yes freezing and I wish that this never ending winter would go away, it’s not doing anyone any good.

I arrived with my trusty shopping trolley this morning. I was expecting a delivery of leaflets because we hand out a lot of them and they’ve proved invaluable to the people that have taken the information on board and used them.

The first thing that I do upon arriving is to take my notepad and some leaflets out of my bag and organise myself. As I was doing so I noticed a young man rushing out of the Jobcentre clutching a bundle of letters, his head was down and it looked like he was in a rush. Sadly because of this I couldn’t speak to him, I hope that he is ok.

I spoke to a middle aged man who needed a food parcel, he told me that he depends on these. He’s waiting for his Universal Credit claim to be processed and to say that he’s upset about it taking so long is an understimation. The tears were welling up in his eyes as he was talking to me. He has already waited three weeks, and he’s going to have to wait at least another four weeks. It’s cruel, and the government knows exactly what it’s doing. They are starving people into submission and it’s working.

I spoke to a woman who also needed a food parcel. She’s struggling to feed herself, her parter and two children. We had a chat and I signposted her. Yes children are going hungry on a regular basis, this needs to stop.

I asked a woman how her appointment went and how her work coach was treating her. She said that it’s terrible, awful and she wished that she didn’t have to enter that (the Jobcentre) building. She took a leaflet and rushed off wanting to get away from the place. I can’t blame her.

I spoke to a man who is also waiting for his Universal Credit claim to be processed. He told me that he has lost a lot of weight because he can’t afford to eat properly. He took a food parcel and I signposted him.

I spoke to a man who had been unfairly dismissed from his job. From what he said he has a good case to take to an employment tribunal so I referred him to my friends over at the Law Centre in Manchester and hopefully he will be able to get a positive result.

I spoke to a man that we spoke to last week. He’s found employment and a very good job at that. He’s over the moon as were we. I’m so happy for him but he is still at the mercy of the DWP until he starts work. If he is reading this good luck!!

We spoke to a woman who had rushed to the Jobcentre for her appointment. She actually lives local to myself so it’s quite a walk. She couldn’t afford the bus fare.

She told us that she works in a school and her partner works for an agency, so his work is by no means reliable and as a result she has to claim Universal Credit. She was very clear in describing how the DWP are treating her. “I work in a school and my partner works for an agency. I feel depressed and intimidated. Because I’m working they are checking my activity all the time and that includes my banking activity, they even ask my how we spend our money and they question us upon that. They question me about everything it’s so degrading. I’m doing my best, I’m working and my partner works, why won’t they leave me alone?”

She went on to say that she feels sick with worry and that she was thankful that we were there to talk to her, we made all the difference and we really helped. Kind words and solidarity make all the difference, never underestimate the value of this.

I spoke to a lovely lady That I hadn’t seen for a while. Shes also waiting for her Universal Credit claim to be processed so needed a food parcel. She gave me a hug and thanked me for all the help that I had given her.

I spoke to a lady who had an appointment with her advisor, she had her appointment card to prove it. The reception staff told her that she didn’t have an appointment because it didn’t show on their computer…. Someone please remind them that their computer system is rubbish and was down in previous weeks. Do they not communicate with each other? The answer to that is no they don’t.

I spoke to a man that needs to make an application for PIP on behalf of his partner, he wants me to help them both so I will do. I gave him the telephone number to start the process, the freeephone number that they neglected to give him earlier. Thanks Steve for helping me with that. He’s also been sanctioned again, and he couldn’t afford to make any more paid for telephone calls. I’ve sorted his credit out however the process to appeal against the sanction starts. He’s been doing so well lately, and had built his life back up. I won’t allow the DWP to bring it crashing down again.

Last but not least, a woman driving her car looked amazed at the sight of us stood outside the Jobcentre helping people. It’s not amazing to be helping people, its the right thing to do isn’t it.

A massive thank you to everyone that came along today, I really do appreciate your solidarity. It was freezing cold and I hope that you all get warm again.

This all happened in a couple of hours outside the Jobcentre, we help a lot of people. I’d really like it if my readers could like, share, tweet, email and even print off my blog and send it to your local MP. 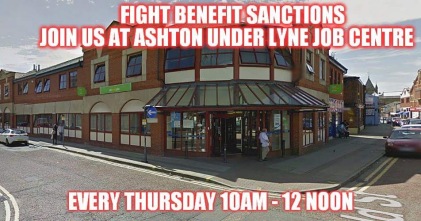 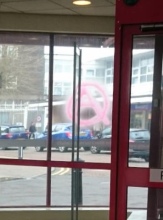 Please donate to keep this blog and the campaign going. Every penny does count. People ask me to do much more than this but I can’t. I’m limited financially so every penny does help. Thank you.

For everyone that has done already thank you.

14 thoughts on “I feel intimidated,humiliated and degraded. They watch everything that I do. Welcome to Universal Credit whilst employed.”