Today was an extremely busy and stressful day. I haven’t been feeling well and have caught a virus which I can’t seem to shake off, probably because I don’t get much time to rest.

I had forgotten that a German tv channel had asked to come and film alongside us whilst we were handing help, advice and food parcels outside Ashton Under Lyne Jobcentre. But I was reminded by a text message so I sprung into action, arriving a little early so not to leave them hanging around, after all it’s not the best place to be standing around.

Almost as soon as I had emptied my bag of all leaflets, hats gloves and scarfs a lady that we talk to on a regular basis walked over in tears. She’s disabled, and has complicated issues. Her ESA payments had been stopped and she didnt know what to do. All I could do is to first give her a hug, then provide a hot drink, which a colleague bought for her. She then calmed down and we offered her a food parcel and help and advice. She has a worker who will help her, but it doesn’t stop the panic and dispair setting in. She knows that her vital lifeline has been taken away again and she was mortified. She will be receiving all the help that she needs.

The food parcels arrived and they left almost soon as they arrived. A woman who is living in awful temporary accommodation has no income until December and she has four children. Having fled domestic violence, she now has to cope with this. I gave her two food parcels because she has four children and herself to feed, and I signposted her in the right direction. My friend Pauline has also contacted her regarding a good drop in that she can attend tomorrow. She will get the help that she needs. Shame om the DWP and local housing for giving her the run around and providing her with sub standard accommodation. Yes, she has a roof over her head but no one deserves to live like this.

After receiving  her food parcels they went across the road to the old cinema, sat on the steps and ate whatever they were able to eat out of the bags. They were obviously very hungry and desperate. Watching this was like watching the food bank scene in the film I, Daniel Blake. It was heartbreaking and we won’t forget this.

We had lots of other people stop and talk to us, it was very hectic. People weren’t shy of telling the tv crew what they thought of the DWP. The film crew were lovely, but it was hard work trying to do the filming and helping folk at the same time.

The amazing film I, Daniel Blake is being released in Germany in the very near future so I have been approached to help promote this for German TV. They were very shocked at what they saw, and at times they struggled to understand the complexities of the situation. They did however understand the cruelty of it.

We gave out lots of help and advice, went therough a record amount of leaflets and handed out all of our hats and scarfs. It’s winter and people have nothing. It breaks my heart seeing people suffer like this. And it shouldn’t be happening.

The Jobcentre must have contacted the police again, because our local constable came and said hello. He knows that we weren’t causing any problems, but the Jobcentre must have been offended in some way today. He went inside and came out saying that they had said that we are to make sure that we don’t leave any food parcels inside the Jobcentre. He said that this was probably not true, and I confirmed that this has never happened. We aren’t even allowed in the building on Thursdays. We both agreed that they were just being petty and childish. I mean why complain about food parcels being handed out? It beggars belief doesn’t it.

This week I also handed out hot food, torches, lamps and batteries to the local homeless people living on the streets. I’ve been very concerned about them, especially because of the cold weather and the rain and flooding that we have had. It’s been awful.

Many thanks to Pauline for also helping with the filming with hardly any notice at all. I owe you one. One day we shall overcome!

Many many thanks to members of the team who braved the weather today to come and join us. You are all valued and respected, and I certainly don’t have enough time to thank you all for the amazing work that you do and the moral support and comradeship that you give me. Who would think it, people from different political parties joining together in solidarity to help those in need. Many could learn from this.

Many thanks to everyone who supports us online and who read my blog and shares it. This means the world to me, because the power of the pen leaves a permanent reminder of the atrocities that are happening everyday.

Many thanks to my long suffering daughters, for having to put up with a stressed busy mum. I am doing this for your future, so you don’t have to go through this. 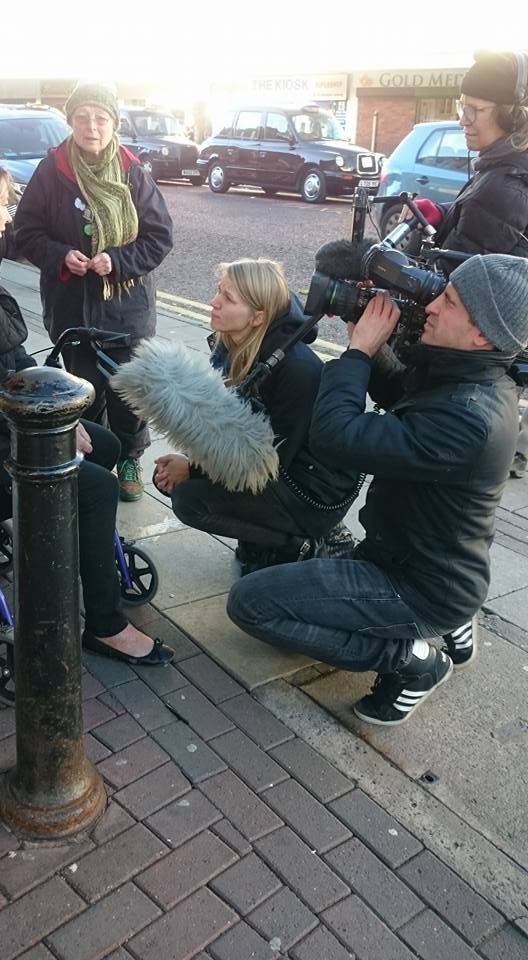 Please share online or donate if you can. Many many thanks.

14 thoughts on “Today’s demo,crying claimants, freezing weather and a visit from German t.v.”