Sorry its been a while since I have updated. The Christmas period has been a busy one and my oldest daughter hasn’t been well. As regular readers will know she has been very ill and has a growth behind her eye. Its not responding to treatment so she’s been in a lot of pain but she will be starting a new treatment plan soon so hopefully that will help. Also my tablet that I write on hasn’t  been working properly so Im using my telephone to blog.

Just over two years ago I was placed on the work programme. I had already found a job off my own back with no help from the Jobcentre, but it was deemed that I attend the work programme for a total of 2 & 1/2 days. If I didn’t attend I would get sanctioned, and I couldn’t afford to loose 2 days money. So already wise to the system I decided to attend. It would be a good experience I thought, I would see how bad things were in there, and I was right.

I was told to attend a place called Standguide, its located in my hometown of Ashton Under Lyne. But its not in the town centre, its above a lovely museum near the canal and isn’t near a bus route for most. To start with you have to buzz yourself in. They don’t leave the doors open for you. You have to get permission to enter. I don’t get just why the door can’t be open, but it adds to the “character” of the place.

To get to the reception desk you have to climb a flight of stairs. No concessions are made for disability which is very unfair. Eventually you reach the desk. There a few young lads and girls all suited and booted behind the desk. You are told to sign in and to wait “over there”. You are not separated into appropriate groups, everyone is made to sit in a room together. No concessions are made. After a while a stand guide operative enters the room. Very well groomed and polished. He says that you have to fill all these forms in. Already armed with lots of knowledge I then proceeded to inform the group that the only form that actually needs to be filled in is the one that says that you have attended.

So myself and a few other people that I had educated refused to sign, we put the initials VC and signed under duress under the signing line on this and for the attendance sign in. You also have to sign in twice, so this is what we did.

You are burdened with constant signing of forms, which I didn’t sign because there is no legal requirement to do so. Then you are shown to a computer where you are to do an ‘intelligence test’. More like a demeaning and boring task that just didn’t appear to look right. Many questioned this. I finished it within 5 minutes and played a card game on the computer. We then had to spend the day looking for ‘jobs’ which didn’t exist. This was on the defunct Universal Jobmatch website and agency websites. Most of these jobs were duplicate and looked to me to be fake jobs.

We were told to make a new CV. I already had a CV which I showed them but refused to allow them to copy. Under the data protection act I was fully  within the law to do this. But this wasn’t good enough. I was told to make a new CV but had to leave things off like my age and sex. It was the worst CV that I have ever seen, my 9yr old could have done better.

Anyway, my constant education of fellow work programme victims proved to be too much for them. They waved me off after my 2 1/2 days there and I skipped out with a big smile on my face. I had actually survived. However it wasn’t over….

Because I hadn’t signed the contract forms, they were determined to get their moneys worth out of me. They constantly hounded me by telephone trying to find out where i was working and who I was working for, they also wanted to know if I was still working. I refused to tell them, so they threatened to break data protection laws and go behind my back without my permission and to ask the DWP for my files so that they could find out. I then threatened them with a lawsuit if they did so…. so they backed off. The same chap kept phoning, and when he heard my voice he would say “your not going to tell me anything are you?” I would say no.. and then he would put the phone down.

It then turned a bit sinister. Every 3 months or so, the boss would roll up outside my house in his flash sports car waving the form for me to sign… it was for my own good he would say, I had to sign. I refused to sign and the last time he visited my house he was chased by my dog down my driveway. He dropped his pen and I walked to his car to give the pen back. I said to him that I was impressed that he could afford to drive such a flash car, and it must be a very hard job profiteering out of the poorest in the area, but he was never to come to my house again, unless he was to give me the full amount of money that the government were offering him for me to sign He refused to make an agreement so he sped into the distance never to be seen again. My 2 years were up and they didn’t get their money.

This was quite disturbing though. To actually try to intimidate me at my home would be quite unnerving if I was a nervous person. He said he did this all the time…. so this does need stopping.
The whole work programme issue does need debating in parliament, on the streets and in newspapers. Some of these firms are corrupt, as one has already been found out to be, and I’m sure that Standguide are or have been investigated. Please let’s not let this become yet another forgotten issue. Let’s start shouting about this!!!

Before attending, please educate yourself with the facts, forwarded is forearmed, and I was never under any contract with them 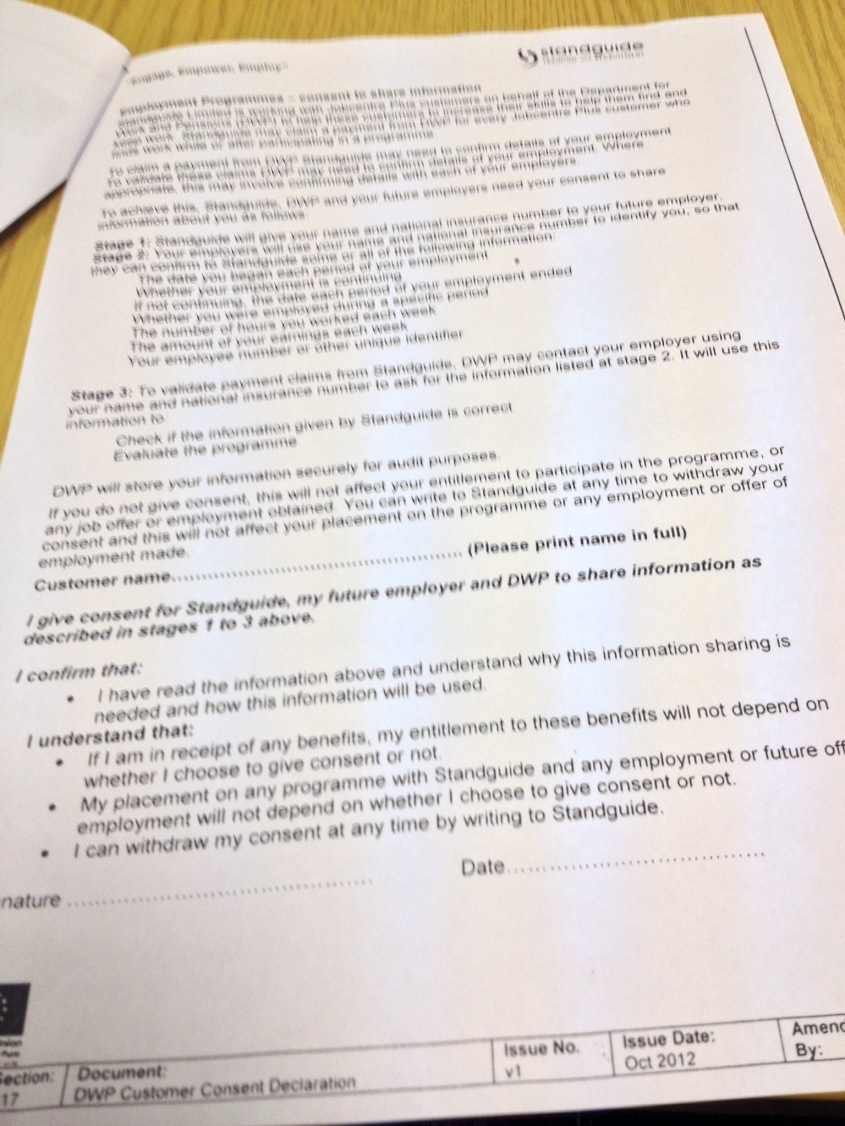 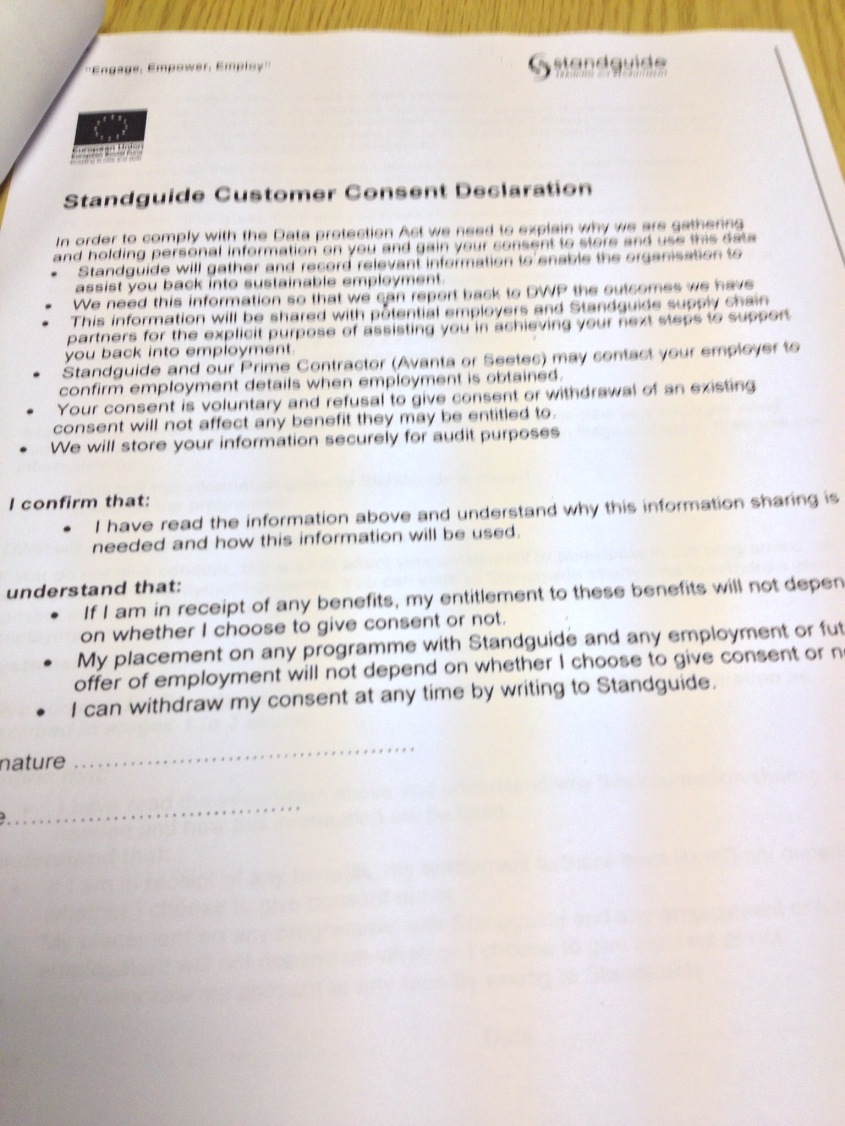 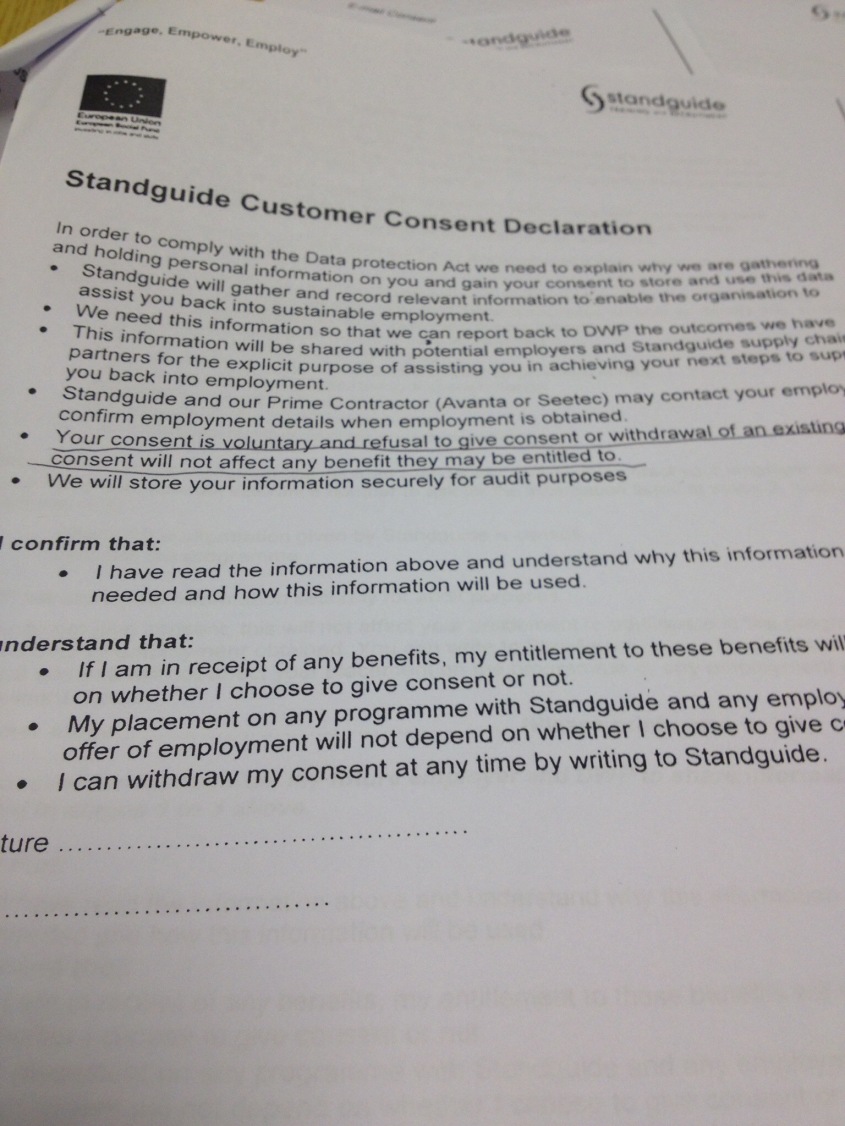 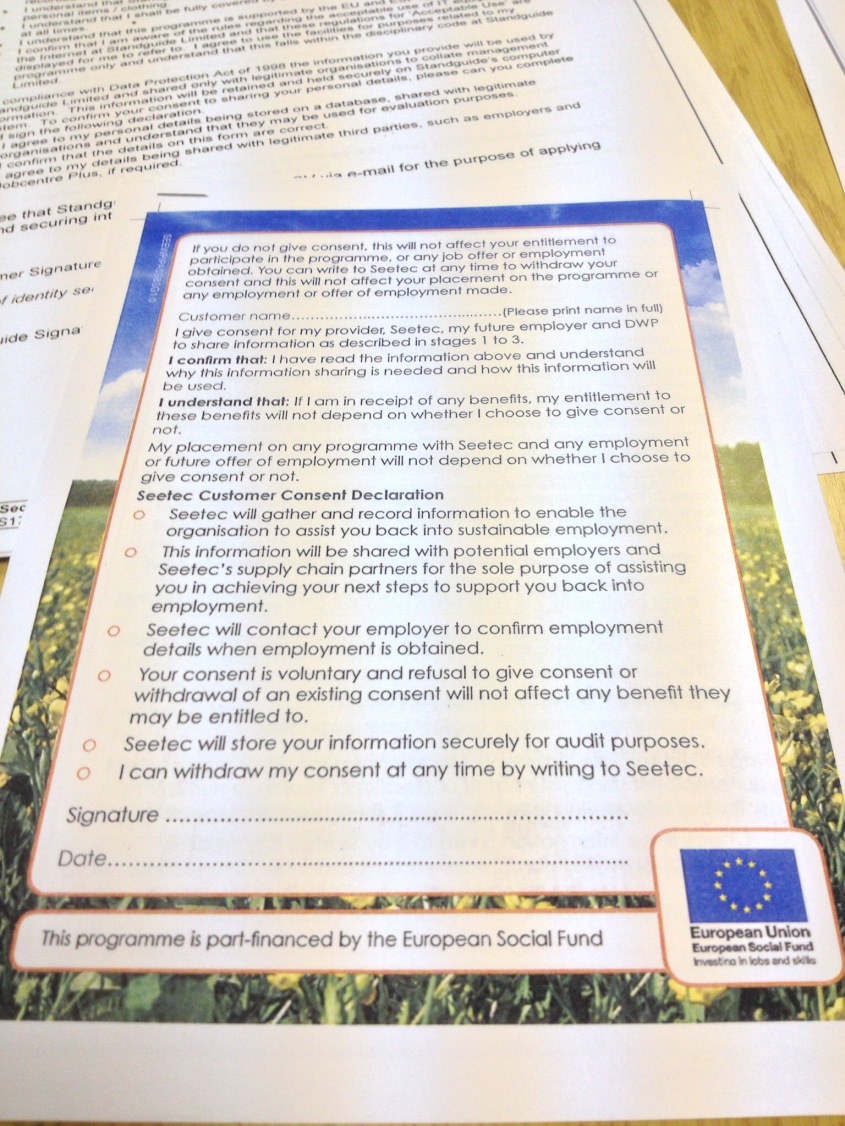 This work is licensed under a Creative Commons Attribution 4.0 International License.

23 thoughts on “My experience of The Work programme.”