Dear readers and supporters I hope that you are all well and surving the best that you can. I know that lots of you are suffering, but remember I’m here for you to talk to as we are all there for each other.

Yesterday was a rather busy morning but once again I had to finish early again. We ran out of leaflets, I’ll hopefully have this rectified for next week.

We spoke to lots of people and helped lots also. We were also thanked by members of the public both for the help that we had given them previously or for advice that we gave them yesterday.

The most common sentences that we heard yesterday were ‘They never told me that I could do that’ ‘Thank you’ It’s crap and a pile of shite’.

As usual we handed out our food parcels and gave everyone that we spoke to help, advice and signposting if needed. Of course the DWP should be doing this but they aren’t so we have to do it.

We do all this because we can’t stand injustice, we also hate the fact that so many of you are suffering and if we can alleviate this a little its the right thing to do.

As I arrived outside the Jobcentre I spotted a woman walking in and out of the Jobcentre and council offices which are next door.

I approached her and asked her if everything was OK and could I help her.

Her story is this. She’s a single parent and works part time because it’s the only work that she can find that fits around her children. She is claiming universal credit and is struggling to survive.

Whilst she was waiting for her universal credit to be processed she accumulated rent arrears that she’s offered to pay off by paying a bit extra rent every month. Her landlord refused and has started the process of evicting her and her children.

When I say that she’s doing everything to rectify her situation I mean it, she’s really trying but to no avail.

As a direct result of universal credit she’s going to loose her home, and you can bet that our local housing options will tell her that she’s made herself intentionally homeless.

No person in this situation wants to make themselves homeless but universal credit ensures that almost everyone finds themselves in rent arrears.

Does the government care? Not one bit. But many people in the same position as her voted for the Tory party in the general election. Shame on them

I had a conversation with a 65yr old man who was told to attend Ashton Jobcentre to see an advisor. Upon seeing his advisor he was then told that he had to travel to Hyde Jobcentre for another appointment.

He asked them if he could see someone at Ashton Jobcentre instead but they refused. So he had to travel to Hyde which isn’t exactly near Ashton.

The DWP were responsible for him being late collecting his kids from school. The DWP doesn’t regard children and childcare as being important, nor do they care a bit about a child’s safety.

It wasn’t much later when I had a conversation with an older woman who asked for a leaflet. She told me about her experience with the DWP when they phoned her up recently.

The whole experience was awful for her, she told me that they were literally shouting to her and they made her cry. She’s disabled and already suffered from anxiety. This experience made her ill with worry.

I then was stopped by a woman that gestured towards me, she wanted to ask what we were doing. She couldn’t speak because she has had throat cancer and lost her ability to speak.

Luckily I lip read myself quite a lot so it could understand what she was saying. Her story is this.

Because she can’t speak she can’t make phone calls, she also finds the whole process of being forced to look for work very stressful. She had been told that not being able to talk shouldn’t stop her from applying for work.

Her advisor had also told her that she had done something wrong but she denies this.and is trying to fight it.

Even though she found it hard to explain what she had done wrong it was very obvious that she shouldn’t be forced to go through this rigmarole. But she is. The DWP don’t give a toss about anyone or anything.

It’s blatantly obvious that no one should be suffering like these people are. It’s such a cruel, horrible system that is determined to make everyone suffer regardless of age, sex and disability. Don’t let them tell you otherwise.

Needless to say we will be back next week to help people.

Thank you so much for all your support, when I say that it means the world to me it really does. 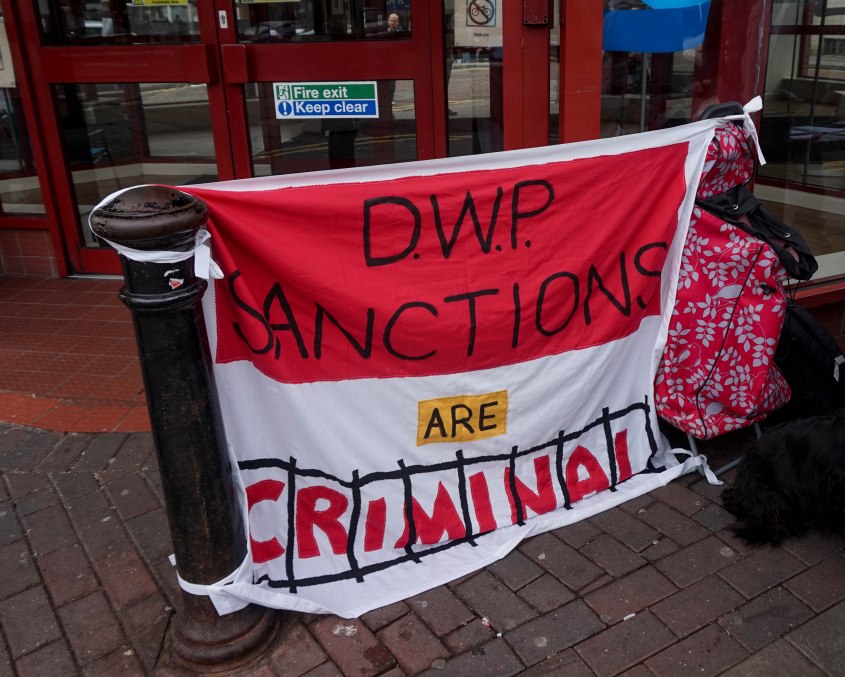 Please read, share, tweet, email my blog. The more people that reads it the better. Unbelievably there are still people out there that are denying that this is happening.

For anyone wanting to donate theres a PayPal button at the top and side of my blog. Thank you so much xx.

7 thoughts on “Had throat cancer? Can’t speak? We expect you to look for work.”