Dear readers and supporters once again I have to apologise for publishing this blog late. I’ve been out campaigning for my local Labour Party.

Anyway today was pretty dire, it was raining, in fact it still hasn’t stopped.

It was also cold, deadly weather for street homeless people and anyone that can’t afford to heat their homes.

Once their clothes become wet, they can’t dry them so they become very cold and hypothermia can set in. This can be deadly so please spare a

thought for people in this situation.

As usual all the food parcels were gone as soon as I handed them out. Most of them were needed by people having problems paying their council tax and extra top up rent. If they can’t pay the council will take the money directly from their universal credit payments. Their social housing landlord will also threaten to evict them even though the person that I spoke to owed less than £100.

New Charter housing certainly don’t give a toss about their tenants but that’s another story.

We spoke to lots of people today but sadly we had to end the demo early because we were drenched and cold.

I had a conversation with a man that has several disabilities which prevents him from applying for many of the jobs on offer.

Dispite this his job coach has told him that it would be in his best interests to attend a so called wellbeing course.

Wellbeing is the latest buzzword being used by the DWP. They like to pretend that these rubbish courses will help people, especially disabled people.

They don’t however tell the person being forced onto these courses that they (the DWP) gain financially from sending people on these courses as do the course providers.

We are seen as a pound sign, a number of which they can profit from.

What they forget is that most people have enough commonsense to realise that no one can ever be cured by attending a course. They’re another reason to harass a person more, to sanction them if the course provider advises them to.

The whole system is crooked, people are being harassed so much by the DWP that they can’t see a future for themselves and they take their own life. Meanwhile the DWP will still send letters out to the families of the deceased.

It’s Orwellian in nature, they control a person’s life to the extent that they can cut off their very means of survival with the click of a button on a computer.

Please can they start talking to people as if they’re human beings, with respect and not disdain? It’s not too much to ask is it.

I spoke to a single parent that had been asked to attend their first back to work interview because their child is now two years old.

They were understandably nervous and had no idea of their rights regarding job searching etc. Thankfully we were able to help them and we handed them a copy of our survival guide.

Call me old fashioned but I’m a firm believer that a parent or carer should be able to stay at home with their child until their child reaches school age or older. Obviously parents that want to work should do so but the option should be there.

Children need their parents, it’s vital for their development.

Children also need to be able to eat good, healthy food and live in a warm house. These very basic things are denied by this cruel government.

I write this on the eve of the general election, the most important General election in many years. Let’s hope that we get a good result. If we don’t many of us won’t survive another 5 years of this cruelty. I can’t stress this enough.

We will be back next week for our annual Christmas Demo. I will be making a wreath unless I can get a volunteer to help me. I’m also needing to buy non alcoholic mince pies and other Christmas foods to hand out to the public.

We will also be handing out extra Christmas food parcels so if you need one please contact me so that I can save one for you. If you don’t it’s a first come first served basis.

Also please come and join us it’s at the same time 10-12 outside Ashton Under Lyne Jobcentre. Please come and say hello and maybe sing an appropriate Christmas Carol or two. 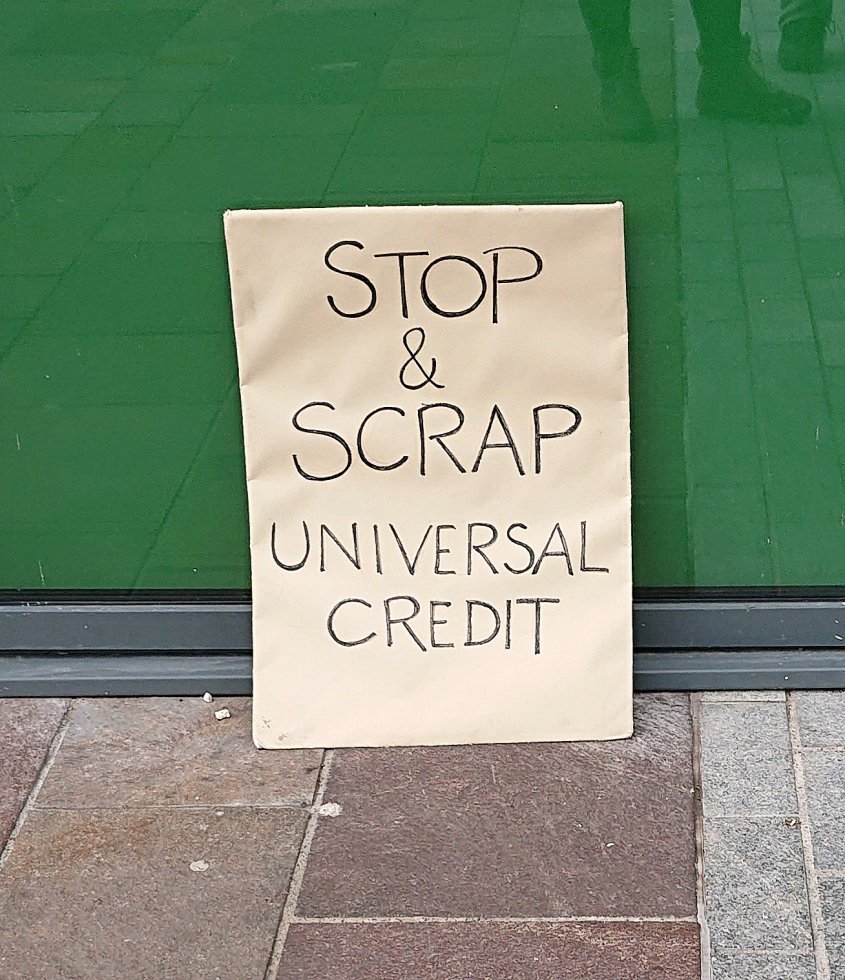 One thought on “Forced to attend DWP course dispite having multiple disabilities.”