Dear readers it’s Thursday and it’s blog day. Unfortunately we had to end the demo early because the rain was torrential, however now that I’m home the rain has stopped and the suns shining for a minute. Sod’s law isn’t it.

Whilst I was waiting for Roy and Gordon to drop off the food parcels I was stopped by a man standing behind the bench that I was sitting on. He looked awful, in the midst of addiction and the pain on his face was startling.

He asked me if I’d like to buy an x box game which I declined but told him that he could have a food parcel in a minute. I’m not here to judge him or to question where he got the x box games from, however I am there to at least give him some food and to signpost him which I did.

The sad reality is that incidents like this are common up and down the country. Being street homeless is no fun and it’s made worse if you have an addiction.

The governments answer to this was to restrict funding to rehab places and organisations that they’ve been forced to shut, which in turn puts a lot of pressure upon any remaining services.

Because of this, this chap and many like him fall between the cracks when they’re the ones in most need of support and help. I really hope that he approached the local organisations that I signposted him to.

A similar incident happened the other day whilst I was walking my dog on a field close to my home. A man was sitting in the bushes under a tree, out of the way. He stopped me because he saw my dog and we had a lovely conversation about dogs. I asked him about his situation but he was vague about it, but he did tell me that he was street homeless.

I signposted him to local organisations, which to be fair they most likely already know of him, but because he’s in the midst of addiction he could well be falling in between the cracks or he might have refused help etc.

Once again it’s not for me to judge, but I did signpost him and I gave him some food from my home. I really hope that he’s gone to a local organisation that will help him.

Back to today. Because it was raining we were only able to do a hour but we helped quite a few people within that hour. We also signposted everyone that we spoke to and handed them a food parcel if they needed one.

I had a conversation with a man that I shall call Bill. Bill is currently claiming ESA, although he seemed confused as to what benefit he was claiming. Bills story is this, he’s lost his wallet with his money and bank cards in, he’s also lost his ID and hasn’t got any money at all.

Bill told me that he’s due his payment on Monday and by then he should have his bank card etc and will be able to access his money. In the meantime he’s got no electric and no food.

Bill approached a food bank local to him and asked them if he could have a food parcel. He was refused because he’d already had three. He then panicked and luckily he was told about us.

This made me think. How many people are refused a food parcel after having three? I do know that many food banks use their discretion and give more than three, but this ruling is absolutely terrible. Considering that a claim for universal credit often takes more than five weeks, and appeals regarding ESA and PIP decisions take much longer, saying that three food parcels is enough is obscene.

I do know that many food banks do hand out more than three food parcels, and thank you. You’re saving life’s, helping people to survive an horrific situation.

I then spoke to a young woman, she didn’t need a food parcel but she told me that universal credit is the worst thing thats ever been invented.

She told me how difficult it is for her to manage on universal credit, saying that she tries to budget but she doesn’t have any money to budget with. She’s stressed out, trying to manage on a system that’s totally inadequate for both her and her young sons needs.

We briefly spoke to two young men and we asked them if they’d like a leaflet and a food parcel. They said yes to both and I asked them how they were coping. Their reply was “It’s shit”. Yes it is isn’t it.

We briefly spoke to a woman that needed one of our leaflets for her daughter. She didn’t say why, but hopefully her daughter will get the help that she needs.

I then spoke to a woman that is struggling on universal credit. She has three children and worries about how shes going to feed them. I handed her a leaflet and told her that we are here for her whenever she needs any help.

It was then that the rain got much worse and we had to leave, dashing for shelter to a local coffee shop.

I don’t need to tell you that life shouldn’t be like this. No one should be homeless and living on the streets regardless of addiction or not. Parents shouldn’t have to worry about how they’re going to feed their children and there shouldn’t be a need for food banks.

Please readers, use your vote in the local elections and vote against your local Tory candidate. The less of them that have any power the better. It’s the only way to try and put an end to this cruelty.

I’m so sorry that the blog is short and we left early. The weather was awful and I’m still not 100% over that rotten virus. But we helped lots of people and thats the main thing isn’t it.

Lots of thanks to Roy and Gordon for coming today and bringing the food parcels. Thanks also to all of my blog readers and supporters. 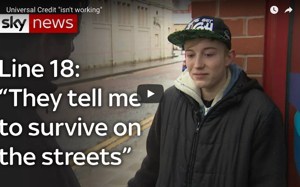 There’s a PayPal donation button. At the top and side of this blog for anyone wishing to donate. I’m a skint single parent who’s also struggling to keep my head above water so to speak. Thank you.

4 thoughts on “Refused a food parcel because they’ve had 3 this year.”