Dear readers, yes its Thursday again, this week was the last week that we’re going to be stood outside the old Ashton Jobcentre. Don’t fear though my friends, we’re moving to where the new Jobcentre will be which is the new Tameside One building where some of the local council will be based, the library and Welfare Rights. Because the Jobcentre is inside the new building and up a floor we can only stand outside on the ground floor where the public entrance is. Ah well, you win some and you loose some.

I wonder if the market manager will be reporting me to Interpol again for standing near Ashton market, that was extremely funny.

Today was a tad slow probably because the Jobcentre is closing tomorrow ready for the move to the new building. This didn’t stop the need for food parcels and need for help and advice.

As I arrived at the Jobcentre Roy was waiting for me with a few people that needed food parcels. I must note that I was on time but I had to get a coffee because it’s chilly again up north. I’ll list some of the conversations as I usually do, and I’ll use pseudo names to respect a persons privacy.

I spotted Dave as he was running into the Jobcentre, he hurriedly told me that he’d been sanctioned but he didn’t know why. He also hadn’t received any letter etc to confirm this. Needless to say that this is pretty standard, the DWP send most letters out second class and they don’t rush to post them either. I gave him some advice and handed him a food parcel upon his exit.

Jim stopped to chat to me as he was leaving the Jobcentre. Jims story is this, he had a heart attack a few weeks ago and he’s attempting to make a claim for universal credit whilst he can’t work. He wasn’t sure how long that it would take for him to receive a payment so I told him. Jim was surprised that it would take at. Least five weeks and he now hopes that he’ll be back in work before then. Nice one DWP, don’t you have any idea of how serious a heart attack can be? Callous is one of the words that I like to use for incidents like this.

I spoke to a young man who attends a local organisation called ‘Roots to work’. Roots to work sound very much like a work programme place where attendance is mandatory or else expect a sanction. I prefer to call them hell holes or sweat shops of struggle, pain, embarrassment and struggle. I’m sure that they’ll disagree with my opinion, but having experienced these places myself I know what I saw and experienced.

One day not long ago some DWP representatives marched into Roots To Work and informed him that he wouldn’t be able to claim ESA for much longer and he’s going to be transferred over to universal credit in the near future.

This is correct but they didn’t inform him that he would be eligible to claim the disability element of universal credit, so I informed him of this. What a surprise the DWP being selective in what they say to people. Their very presence set him into a state of panic.

I then spoke to Gill, a young woman who visibly looked upset. I asked Gill if I could help her. Her reply was ‘My baby died three months ago, I had only just made a claim for universal credit just before my little boy died.’

Gill then told me that her baby’s funeral had been performed by the local council council and she had had to pay for this themselves. She’s now struggling to get the DWP to reimburse her some of this money.

My heart went out to her, she had been ill advised, felt alone in the world and was now trying to get a receipt for the funeral to satisfy the DWP. I signposted her to my local MP for help with this.

I asked Gill how she was coping and were the DWP treating her well. Her reply was that she’s struggling to cope and the DWP haven’t shown her any sympathy for the death of her baby. She’s still got to search for a job.

I helped and advised her the best that I could. I gave her a hug and told her that I’m here for her whenever she needs someone. I also signposted her to local organisations that might be able to help her.

The memory of seeing her stood there in tears clutching her baby’s baby bag will never leave me. No one that have lost their child should be treated like this should they.

I then spoke to Mandy. Mandy is a young woman at the start of her adult life and should be enjoying it. Instead Mandy is battling the universal credit system and at the moment she’s loosing this battle.

Mandy then tried to appeal their decision but was told that they weren’t allowing this and she had to make another claim for universal credit, so she now has to go through the whole process again.

How much of this shit are we expected to put up with? A whole lot more when everyone else is moved onto universal credit and the system can’t cope. Wonderful… Not.

I then spoke to Jenny who is her sons registered appointee. Jenny receives al of her sons DWP letters and attends all of his DWP appointments with him. Jenny wanted to drop off some information on behalf of her son but was refused, she was obviously distressed so we set to task to sort this out.

I gave Jenny the telephone number for Ashton Jobcentre and she phoned them up from outside the Jobcentre, they then allowed her to drop off the required documentation. If I hadn’t done this then her son would have been most likely been sanctioned.

Honestly this shouldn’t be happening. To be told by a DWP representative at the front desk that she wasn’t allowed in to drop the documentation off and that she wasn’t his appointee either. Not only was this information incorrect, it caused her to become distressed and angry. If they had looked at her sons records correctly they would have seen that she is his appointee.

DWP stop doing this. It’s not that hard to correctly check a persons details and to be respectful to a person is it. Sometimes I think that I’m speaking a foreign language that they don’t understand.

I then spoke to the PCS rep for Ashton Jobcentre, he had no problem speaking to me and we discussed several things. Unlike his predecessor he wanted to listen etc. If you’re reading this thank you.

Today was tough but we do this every week. I’ve been standing outside Ashton Jobcentre for five years now, my comrades have been helping for three years. In a strange sort of way I’ll miss the old building. We’ve shared tears, hugs, and advice. We’ve also had plenty of laughs and have had some memorable demos there. Goodbye old building, DWP we’ll see you at the new building. 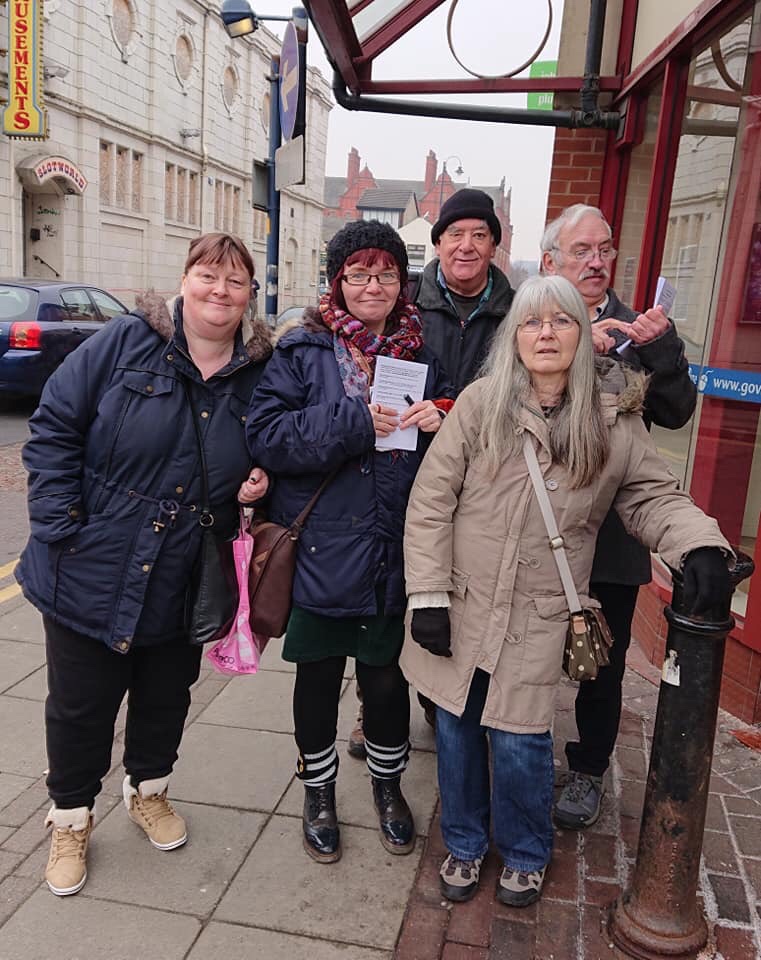 A massive thank you to all my supporters, readers and my campaigners. You all mean the world to me.

Thank you to everyone that came along and helped this week, thank you so much.

I’m a single parent just trying my best to help people and right the wrongs of the DWP. I receive absolutely no funding for the work that I do. There’s a donation button at the side and the top of my blog for anyone who would like to donate. Thank you!

8 thoughts on “My baby died and they won’t help with the funeral costs.”