Sorry this weeks blog is a bit late, all will be explained. I’ll start with the weather, sunny but chilly. There always seems to be a cold wind emanating from inside Ashton Jobcentre….

We were joined by our friend Kevin from DPAC, who had surprised me with a visit. I was over the moon, and so glad that he came along. There was only three of us there today because Roy wasn’t well. Get well soon Roy!!!

Anyway today was quite busy, some new faces and lots of differing problems, all of which could have been avoided if it wasn’t for the hypocrisy of the DWP and the cruel system that it operates. I’ll list the problems as usual, but everyone will remain anonymous due to the very real fear of DWP reprisals.

The first person that I spoke to was a man who had a chest infection. He told me that he was too scared of not attending his appointment because he didn’t want to be sanctioned again. I informed him that he is allowed to hand a sicknote in but he told me that it wasn’t worth the risk, and he had already had enough bother off the Jobcentre and he wanted a quiet life. So instead he forced himself to his appointment even though he wasn’t well enough to do so. Yes the DWP really do rule with fear.

I spoke to another man who told me that he hadn’t been told that he’s claim is being shifted over to Universal Credit, and had only just found out. I informed him of his legal rights, signposted him to where he can get further information so that he can empower himself. This is essential to prevent any wrongdoings by the DWP. He promised that he would be doing this and he was thankful that I had spoken to him, and he walked away less worried than he had arrived. it’s a mess and the DWP know it. They really need to start informing people correctly about the changes coming to them, and in plenty of time, not when it is nearly upon them like a thunder cloud.

I spoke to a lovely woman who I spoke to last week. I wish that I could say that she was in a better financial and emotional state but she isn’t. She’s afraid that she might loose her home and is also hungry. I gave her a food parcel and really urged her to contact local services that can and will help her. She also has my telephone number and knows that she can phone me at any time.

Some people think that it’s easy to signpost people, and that they should access the services offered straight away but it isn’t. When you’ve had a pretty c***p life, been treated badly and have nothing many people learn to trust only familiar faces. I totally understand this and will help her to build her confidence up so that she is able to do this. But in a decent world she wouldn’t be in this situation in the first place would she.

Then we had another regular heckler approach us, he appeared to be in a bad mood.  He approached Gordon and proceeded to tell us that all the problems that we are having in this country are caused by ‘all the foreigners being let in…. And foreign aid’’. Gordon tried to talk reasonably and kindly to him but he wasn’t having this, so proceeded to shout to us all that were all ‘talking rubbish’. He then walked off, looking dissatisfied that we hadn’t given him the response that he wanted, whatever that might have been.

They never give up do they, spouting their racist, ill informed lies. I had a day of it myself on twitter yesterday (Wednesday) when local elected Tories decided that they’d have a go at me and what seemed to be half the FLA tweeting me. This shows that we have a lot of work to be done in this area doesn’t it.

I spoke to a young man who is a carer for his grandmother. He just wanted someone to talk to, have a chat because seeing his grandmother become ill has upset him a lot. We had a good chat and I signposted him to local and national groups that he can join for support.

I spoke to a man who I regularly speak to, he has very limited vision and is registered blind. His partner is dyslexic and also struggles reading. Despite more than a few letters of support to the DWP and their advisor at the Jobcentre they are still being sent written letters for appointments etc, and are asked to respond to them. How hard is it for the DWP to recognise that they can’t SEE the writing, and can’t READ them correctly either. All appointments etc have to be made via a telephone call, but this rarely happens.

Honestly they set disabled people up to fail constantly and it’s a good job that people like myself and their friends can read the letters for them. Just STOP discriminating against them please DWP and treat them like the decent human beings that they are. It’s not hard is it.

I spoke to a woman who has been volunteering at a placement for a while now. Her placement were so impressed with her work that they have offered her employment, but she has to wait a fortnight to start her job. In the meanwhile she has to continue volunteering.

She was over the moon about this, because it hasn’t been easy for her and she told her advisor. Her advisor then told her that she had to finish her placement there, even though she is starting work in a fortnight and start somewhere else.

This means that she will loose her job offer, and she’s depending on this job, like she said to me ‘It’s a massive achievement and I thought that my life would change for the better’

What exactly is the DWP playing at? She’s found a job yet they are actively preventing her from starting her job. Complete madness, their slogan ‘Making work pay’ is total hypocrisy, it’s madness.  Honestly you couldn’t make it up.

I signposted her straight away and told her of what she can do to prevent this happening.

I spoke to a man in passing and he told me that the Jobcentre is ‘Bloody pathetic and that they should change their name’. Yep.

I spoke to a person who will remain totally anonymous. They suffer from several disabilities and illnesses and to say that their struggle to survive every day is an understatement.

They had failed their ESA medical because they were too ill to attend it. No one had told them that they could remake an appointment or appeal against this decision. Letters from the DWP now scare them, so much so that they can now  cause a panic attack, their ESA element has now been stopped and they are living on the bare minimum, just buying food and not paying bills.

They started to cry, and told me that they didn’t know what to do. This system is cruel, heartless especially to the disabled, and this makes me both upset and angry.

I did what was the DWP should have done in the first place, which is basically their job in the ‘good old days’. I told them that they can appeal, that they should appeal and informed them of all the local help available etc. I’m very confident that after a good long chat today that they are feeling a bit better and will start the process of appealing.

I asked a young man how things were going and his response was ‘They are f****g idiots’ pointing to the Jobcentre. Obviously something wasn’t right but he wouldn’t elaborate and to be honest I can’t blame him. He probably wanted to get away as fast as possible.

I spoke to an older couple who are both trying to navigate the system. They have read our survival guide and now keep a good filing system and a good, written record. The man looked at me and said ‘I really thought that they would find me a job, I was wrong’ They both deserve so much better treatment than this, everyone does.

I spoke to a woman who has been trying to get a HC1 form from the front desk for what she said ‘ages now’. They had previously refused to give her a form. Today, like magic she was given her form at last. She told us that it was because we were standing there, and it wasn’t the awful G4S guard this time.

Polite reminder to G4S… You are SECURITY GUARDS, employed to do that only, and you are not employed to take personal details or hand forms out to people. STOP IT you are actually breaking the law.

I spoke to a person who has now been waiting 9 weeks for their ‘Limited Capability Assesment’ as part of their Universal Credit claim. Despite having a recent ESA assement, being transferred to Universal Credit has made this assessment null and void. So now a disabled person has been waiting for 9 weeks to have an assessment by the same company that did the original ESA assessment.

Nine weeks living on a bare minimum income, which doesn’t provide for their disability needs. Nine weeks. I hate Universal Credit, it’s abhorrent that disabled, vulnerable people are treated in this manner. It’s almost as if they are trying to starve people into submission or death, and in many cases this has worked.

I advised them etc, but this system makes me feel sick. Theresa May you should be ashamed (but you aren’t). The system is serving you very well isn’t it. Remember that this won’t last forever.

After the demo, I went for a cuppa with Kevin who had travelled miles to be with us, then I collected my daughter from school. Sats are now finished yippee!!!! 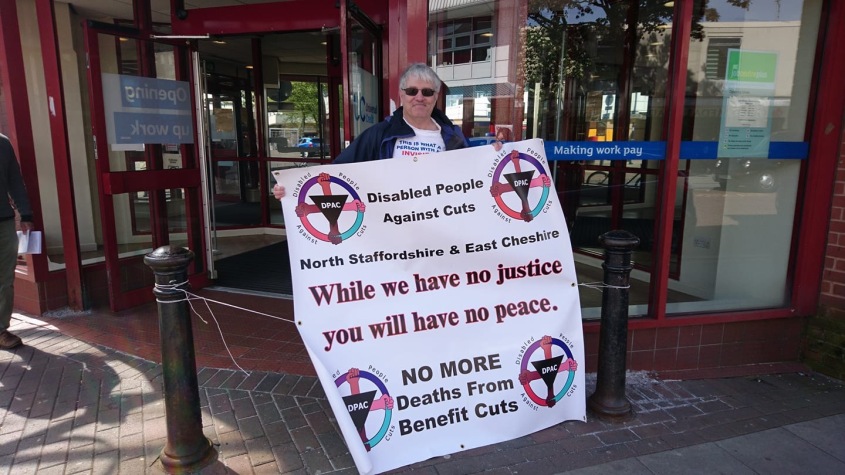 Please read, share, RT and email my blog. I really do appreciate this. Also a massive thank you to all the supporters of my blog. You all, as well as the team make this possible. Thank you!!

15 thoughts on “Two weeks away from being employed after volunteering… Told to stop volunteering there and start at a new place.. DWP hypocrisy at it’s best and worst.”