Dear readers, can I please apologise for the lateness of my blog this week. After the demo, we went for a cuppa to warm up and then went to a meeting. This took time, but it was essential. More news about this at a later date if everything goes to plan.

I’ve had a busy week, and combined with not feeling well it’s been tough. I made a short appearance on The Victoria Derbyshire programme yesterday morning (25th Jan 2016.)  Discussing the need for free school meals for all children, not just years 1 and 2. A doctors appointment has also been made for tomorrow so hopefully all will be well soon. Anyway enough about me.

I arrived slightly early because I was expecting a visitor at the demo. A lovely man named Stuart who wanted to come and help out. I jumped at the chance, its lovely meeting new people and he didn’t hang around, he got stuck right in and started to help. He has knowledge of where some work is available locally so he informed suitable people.

As soon as I arrived near the Jobcentre I was stopped by a lovely couple whom I have mentioned in previous blogs. Their run of bad luck never ends and even though they now have somewhere to live they had no money for electric. They had asked elsewhere but no one could help but I did. So they got food and electric which at the moment is all I can do for them.

The food parcels arrived and as soon as they did most of them were taken. Various people took them all with various problems. One lady is working but is struggling to get by. This happens A LOT and it’s by no means unusual. I referred her and everyone else to local organisations where they can receive extra help.

I spoke to a young man and his father. He had been refused his Universal Credit claim because he hadn’t responded to a letter that they had sent. The problem here is an old one, he didn’t receive a letter, nothing arrived. He challenged this and his advisor told him that it wasn’t their fault, it was his fault he should have somehow known that a letter was going to arrive on a certain day. He didn’t so now he’s having to go through the rigmarole of appealing etc.

I spoke to a man who had failed their ESA assessment. To be honest this is very common, hardly anyone passes their assessment these days. It was in the news recently that ATOS ‘Don’t mind” if recording interviews was permitted again, and equipment is easily available to do so. This then leads me to the question ‘Why aren’t you implementing this then?’ They aren’t and I think that they are just playing lip service, thinking that we are fools.

We spoke to several gentlemen who are finding life hard, they can’t cope really but carry on not knowing what for. They come for a chat and its lovely seeing them. Remember a kind word can make all the difference to someone’s life. We should all try to do this more.

We spoke to a man who is struggling with a previous employer. He had been working for a local factory through an agency. Why on earth they can’t just employ people themselves? It’s a ploy to enable them to pay employees less and dodge paying tax.

Anyway, the agency have told the DWP that he has earnt more than he actually has, and they are refusing to provide him with wage slips etc. The DWP will not tolerate anything that he tells them so now he has to appeal this. He’s frustrated, and understandably so. He was signposted everywhere suitable for help etc and I wish him all the luck in the world.

This is another reason what I don’t like agencies. Many exploit people and they often get away with it. Shame on them.

It was cold and busy today outside the Jobcentre.

I was talking to the man who arrived early on his mobility scooter. JC+ staff sent him outside to wait on the pavement in the cold wind as is their practice. He told me that he’d worked all his life and never been interested in politics. He’s changing his mind now I think.

We spoke to lots of people today, helped lots and handed out Survival Guides, food parcels, solidarity, help and advice. Please don’t underestimate the amount of work that we do and we help people when they are feeling at their lowest. Seeing people overcome their problems is the best thing in the world.

Apologies for the short blog, I’m tired, not feeling great and need to get some rest. 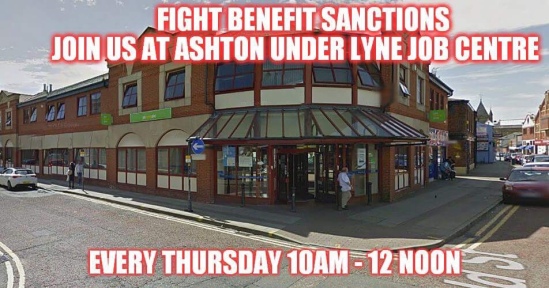 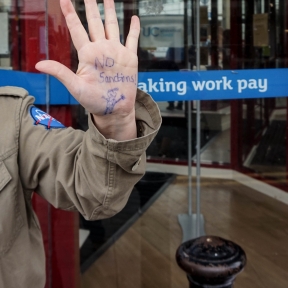 A massive thank you to everyone who reads, shares, and supports the campaign and this blog. Thank you so, so much. If I could give you all a hug I would do.

8 thoughts on “No electric, no food, failed ESA medicals. This weeks blog.”