Ok first may I wish each and every one of my readers a happy new year and I hope that the new year treats you better than the previous one has. Of course I understand that this is impossible unless something drastic happens in the near future, and that isn’t likely is it.

Anyway today was our first week back after the festive period, although we didn’t have any time off, we were helping people outside the Jobcentre last week in appalling weather and that help was desperately needed.

I arrived as usual and as I did Roy was already there waiting for me in his car with the food parcels. I really do appreciate this Roy, because I do know that your health isn’t brilliant at the moment. Please get well soon!

We placed the food parcels in their usual place, and I really had no idea that they would be taken as quickly as they were. I should have known better really because Christmas and New Year payments were paid early and as a result people had spent their money on basic necessities early. Its a no win situation for them, and Christmas can put a lot of pressure on a person to spend money on presents for family members that they don’t want to let down. It’s awful being poor, awful living in poverty and giving someone a present no matter how small it is makes you feel like you still fit in with society, that you don’t feel like an outcast because of your poverty.  And you know what they say, those who have the least give the most. Basically the whole festive period can be a rotten time.

The food parcels were taken very quickly because of the above reasons and for other reasons that I shall list below. No one should have to live hand to mouth, but it’s now quickly becoming an acceptable way of living which disgusts myself and others.

The first lady whom I spoke to has had a rotten time. She has children, and had worked all her life. Due to circumstances beyond her control she became ill and has had to apply for ESA and other benefits related to her children. They have been living off bits of food given to her by her mother and also depending on her parents to provide money for gas and electric.

I spotted her looking towards the food parcels and I asked her if she would like a leaflet. She said yes and we started to chat about her situation and how she has been coping. I told her that she could take some food if she wanted to, and she said yes, she needed it but had been too proud to say so. We had a good chat and I signposted her towards other local organisations for further help. I am hoping that her ESA claim goes through in the very near future although as we know that won’t be the end of the arduous task of trying to survive and cope with the seemingly constant medicals.

I spoke to a man who was drenched from head to toe. He had no coat, had lost his wallet and had nothing. He asked for a food parcel, I gave him one and referred him to a place where he might find a coat. He’s a young man, about to start his life instead he is having to live like this and quite simply it’s unacceptable.

I spoke to a lady who is on the path to recovery and she comes to see me every week. She’s doing so well and her smile said it all. What a wonderful lady I’m very proud of her and everyone else in similar situations.

I spoke to a man who is waiting for his Universal Credit claim to go through. He’s been waiting a long time now, but that isn’t unusual. The six week wait is a myth, I know that I’ve said this before. The wait is much, much longer.

I spoke to an older lady who was also waiting for her Universal Credit payment to go through. I know that she applied not long before Christmas so she won’t receive a payment until at the very least, the last week of January. I advised her that she can get an interim payment, but she then told me “How on earth am I going to pay that back? I owe money everywhere, to friends, family and I’ve taken loans out. I can’t afford to pay anything else back.” I gave her a food parcel, and advised her to get some financial advice from a local organisation. She looked so depressed, fed up and thin. Just by looking at her I could see that she hadn’t ate for a while.

I spoke to a chap whom I have been speaking to for around 3 1/2 years now. That’s how long he has been looking for work and he is trying his best. He is highly skilled and has kept up to date with his his qualifications and experience. He spends a lot of time at the local library and he really can’t try any harder.

He told us that he is concerned that the agencies that advertise on the Universal Jobmatch site could be sending claimants details to junk mail organisations and outlets. This is a genuine concern, because I found myself that once I started to use Universal Jobmatch a while ago I started to receive lots of junk mail, so there’s must do also. It’s already been proven that many of these so called jobs either don’t exist or are duplicated. If applying for jobs through an agency on this site, please find out the name of the company advertising the job and contact them directly. I know not all of them will accept this, but I have heard of successful job applications when this has been done.

He also went on to say that a tougher stance needs to be taken against Universal Credit, he feels let down, not supported by any political organisation and this is a major concern.

I spoke to a lady whom had been forced into self employment by her Job Coach whilst claiming Universal Credit. She told me that she couldn’t cope, it has made her ill, so much so that she has to now claim the sickness element and is now handing in sick notes. She did tell her advisor that she really didn’t think that she was able to cope with self employment, but her Job Coach ignored her. Now she is ill thanks to the DWP.

I spoke to a young man who is new to the whole system. He had worked from leaving school, and due to no fault of his own had lost his job, so he is now having to undergo the whole Universal Credit system, which can appear impossible at best.

He told me that he had just completed a course at a local organisation after being referred there by the Jobcentre. He went on to say that he had proudly passed his exam and has now been referred for another course by the DWP. You don’t get much choice in the matter really but he told me that he enjoyed the courses.

To start this course he needs proof that he is claiming Universal Credit. A print off letter from his advisor, or anything similar that will confirm this. Now you’d think that this would be a simple enough task wouldn’t you… Well no it isn’t. His advisor refused to print off a letter, or anything to substantiate such claim, and instead handed him a telephone number and told him that he would need to telephone the number and a them instead.

It’s not the first time that I’ve encountered this issue, this happens all the time, but come on they demand that he attends the course then the pressure should be on his advisor to provide him with the relevant documents. Common sense does not prevail within the DWP though.

So he left to make the telephone call. The result of this will most likely be that they will send a fax to the Jobcentre later today to his advisor, for his advisor to do a print out that takes 10 minutes at the very most to do. Its ridiculous, and a farce that they seem to gain some kind of sick pleasure out of.

He walked away stating the obvious.. “It’s bloody ridiculous.. It wouldn’t take five minutes to do this, they want me to attend the course. The world has gone mad hasn’t it” I had to agree with him, I mean who wouldn’t?

I spoke to a gentleman that I regularly have conversations with. He had been homeless and has now been offered a flat, and he was so excited to tell me the good news. He is looking so much better and looked very smart. He nearly had me in tears when he said “Thank you for helping me, I couldn’t have done it without you. You never gave up on me, you showed me where I could go for help when I needed it and when I was ready I accessed this help. You saw me at my worst, when I was at rock bottom and never gave up. Thank you. 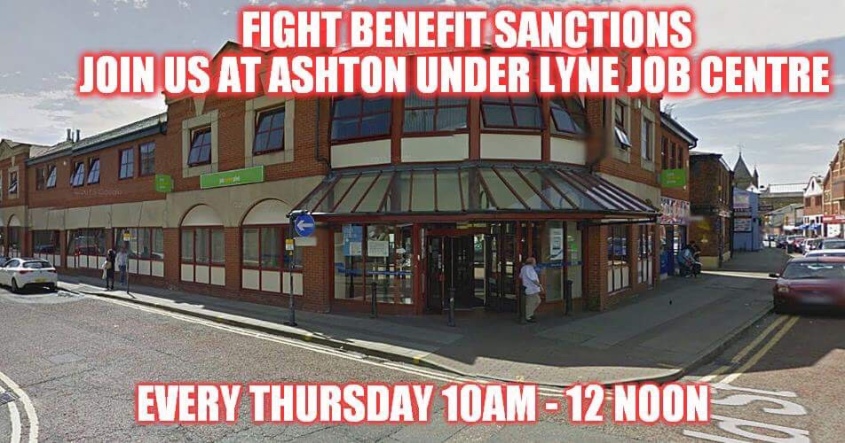 Today was a tough day as usual but what else could I expect. We will be returning next week, and the week after etc. Please come and join us we will give you a warm welcome!

I want to thank all of my readers for supporting the campaign and the blog, you all cheer me up and keep me going as well as the team that is. Thank you!

I’d also like to thank my union the NUJ for the help towards the food parcels and to everyone else that has helped also. Thank you!  Big shoutout to Pauline and the gang. But most of all a massive shoutout to everyone that is having to endure this cruel system. You are all my heroes. I know exactly how hard it is and I hoe that one day it does get better.

Please share, tweet, and talk about my blog. Send a copy to your MP even if they are a Tory. Its very important that we keep the conversation going. Thank you!