I was a bit anxious about the demo this morning for two reasons. The first being the weather, it looked like the heavens were about to open and Odin was about to pour all his wrath upon us. Secondly, it’s the school holidays and I have to bring my daughter with me. She’s normally very good, but is an active, intelligent girl that can easily become fed up.

My fears were unfounded though, because the sun shone, it was warm and my daughter was kept busy thanks to my friend Karl and my friend Lel. My friends are wonderful thank you.

As I arrived so did the food parcels. it wasn’t a long wait, and Roy dropped them off. He’s amazing. He used to work for Citizens Advice amongst other organisations and is now retired, although I don’t think that he has much spare time!

I had noticed a lady that we hadn’t seen for a few weeks waiting across the way for a food parcel. I had been worried about her, but she assured me that she was ok. She took a food parcel and I double checked that she is getting all the advice and support locally that she needs. She said that she was, but she’s very quiet and isn’t too happy taking to new people. I will try and help her with this though.
I spoke to a man that said that he needed a food parcel. He said that he was on the verge of becoming homeless and was caught up in a mess that he feels that he can’t see a way out of. He would only speak to me, and as well as offer him a food parcel, I asked him to go straight to a local drop in to see if he can get some extra support and help. He told me that he would, but I’m not sure if he did. I can only try my best to help people to engage.
I spoke to a lady who is struggling with her Universal Credit payments. She’s waiting for her first payment to arrive and they keep changing dates and payment amounts. The poor woman doesn’t know if she is coming or going. They have told her that she will most likely receive her money in two weeks time, but two weeks without money can seem like a lifetime especially when you have children. She’s also having trouble with her child benefit payments.

She is getting advice from our local Citizens advice Bureau, but I also signposted her to another local organisation. I really hope that she went to see them, but once again, I can’t force anyone. If they don’t know them they might not trust them. The whole DWP system makes them feel this way.

As I was handing leaflets out and advising people, two men dressed very smartly walked towards the doors of the Jobcentre. I asked them if they were from any agency etc, and they replied that they wern’t but they investigate fraud cases.

It was then that I recognised one of these men. I had taken a lady for an appointment at the Jobcentre under the guise of checking that she was recieving the correct benefits. When we were sat at the table I noticed that on the top of his letter, it said fraud in big letters. Of course I immediately questioned this because I knew that without a doubt that this lady had never committed any kind of benefit fraud, or crime in her life. I asked him about why she was there for fraud when her letter said a benefit check. I also asked him for any evidence of any so called fraud. Of course he couldn’t answer me, he went on to say that he would do a benefit check, which he did and she was claiming everything that she was entitled to. I knew this of course.

Watch out for this folks, this is how they can catch you out, especially innocent vulnerable people. Always take a witness with you to any such meetings and make a full record of the conversation, either written of verbally recorded also. Don’t let them catch you out. I’ve seen too many peoples lives destroyed in this way.

On their way out of the building he looked at me and gave me a glare, which was ok, because I was already glaring at him.

We also handed food parcels out to people that don’t want to be mentioned, but their struggle was real. They are very brave in the shadow of adversity and are the true heroes of this world.
Towards the end of our demo a lady walked up to a colleague shouting at him. We had never seen her before. She was an elderly lady who was very obviously fed up with the system. She went on to rant about scroungers etc etc. Whilst I cannot sympathise with the words that she spoke, I can understand why she is angry.

The town that we live in has been run down so much it was unrecognisable to a 70yr old man that we spoke to today. He had just returned back to England from South Africa where he had lived for many years. He told us that he didn’t recognise the place. It’s awful he said, no wonder young people have no hope. They’ve got nothing to look forward to, no chance of a decent job, no chance of anything. He said when an area looks run down and uncared for so do the people living there. I totally agree with this.
The government has systematically destroyed communities, are not supporting people adequately in their time of need and cut a person’s lifeline off when they decide to sanction them.

We can’t as a country carry on like this for much longer, something will have to give way, and the government realises this.

When it’s time to vote folks, use your vote wisely. I can’t stress how important that this is. 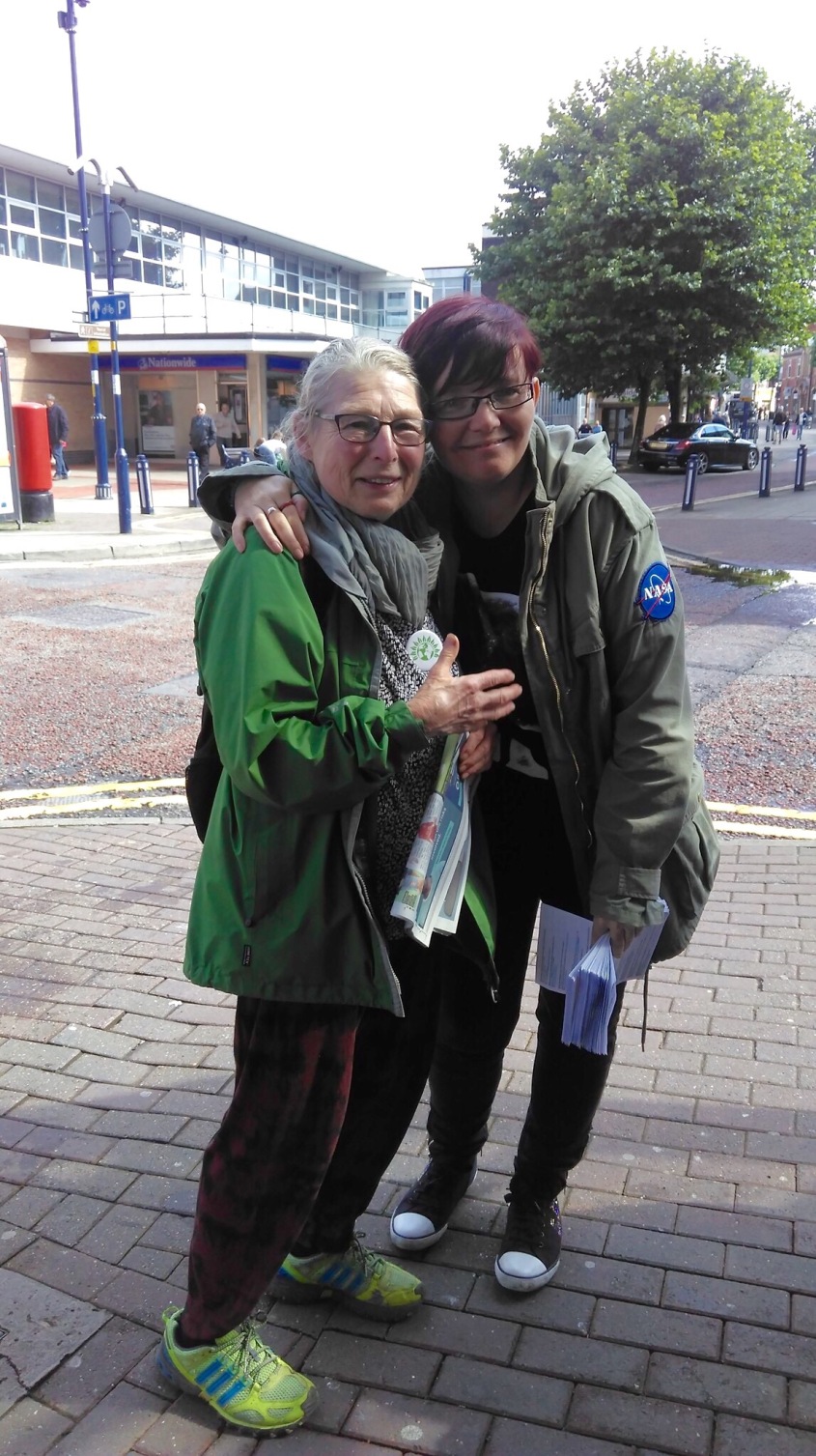 A massive thank you to everyone that managed to join us today. It was a very slow start, but I’m so happy that you all arrived. Thank you so much.

Thanks to my daughter for taking the photos. She’s fab.

Please share and talk about this blog as much as possible. A lot of people still have no idea of what life is like for people having to endure signing on and claiming any type of benefit. It’s heartbreaking having to share these stories every week, and often we return home upset and frustrated.

Also please donate if you can. Every penny helps thank you!
http://www.paypal.com/cgi-bin/webscr?cmd=_s-xclick&hosted_button_id=K47PHPHS5XYRC&#8221; target=”_blank” rel=”nofollow noopener noreferrer”>