I made my way to our weekly demo after dropping my daughter off at school. I like to have a cheap cuppa beforehand and people know that they can find me there.

I was excited at the prospect of good weather, yesterday had been roasting hot. Today was sadly different. It didn’t rain though, although the breeze was cold. I sometimes think that we are destined to have bad weather.

Roy had met me at the café and we walked over together. As we arrived we noticed the queue for food parcels, but it isn’t your typical queue. Many people needing help often feel embarrassed, so they don’t line up. Instead they wait around in various areas near the Jobcentre. Some are also scared that their Jobcentre advisor will see them.

The food parcels arrived, delivered by Gordon and the queue moved towards the car. To say that it’s awful that people are having to use food parcels is an understatement. But to see them waiting in shadows and round corners really breaks my heart. It’s very reminiscent of early Victorian England. Awful just awful.

We handed the food parcels out and had a chat with all of the people receiving them, to make sure that they are coping and awaiting hopefully positive news that their situations have improved. Sadly it hadn’t. I suppose I shouldn’t expect miracles.

We spoke to lots of people. Today’s common theme was Universal Credit and the horrors that come with that.

People are surviving on next to nothing or nothing. We heard the story of a woman, her husband and children who are surviving on next to nothing. They were forced to claim Universal Credit because last year her husband had been told to apply for it and had received a payment of £7. An absolute fortune.. not. So now they are left to survive on Universal Credit. They now work, but despite the government saying that they are making work ‘pay’ the reality is much different and horrific.

This is the letter that she showed me. it’s complicated but it’s awful. You can bet that they will be missing some meals this week. Work does not pay when you claim Universal Credit. It was created to create suffering and to make a person constantly feel subservient to a system that hates them. There’s no way out when full time, high paid jobs are as scarce as gold dust. 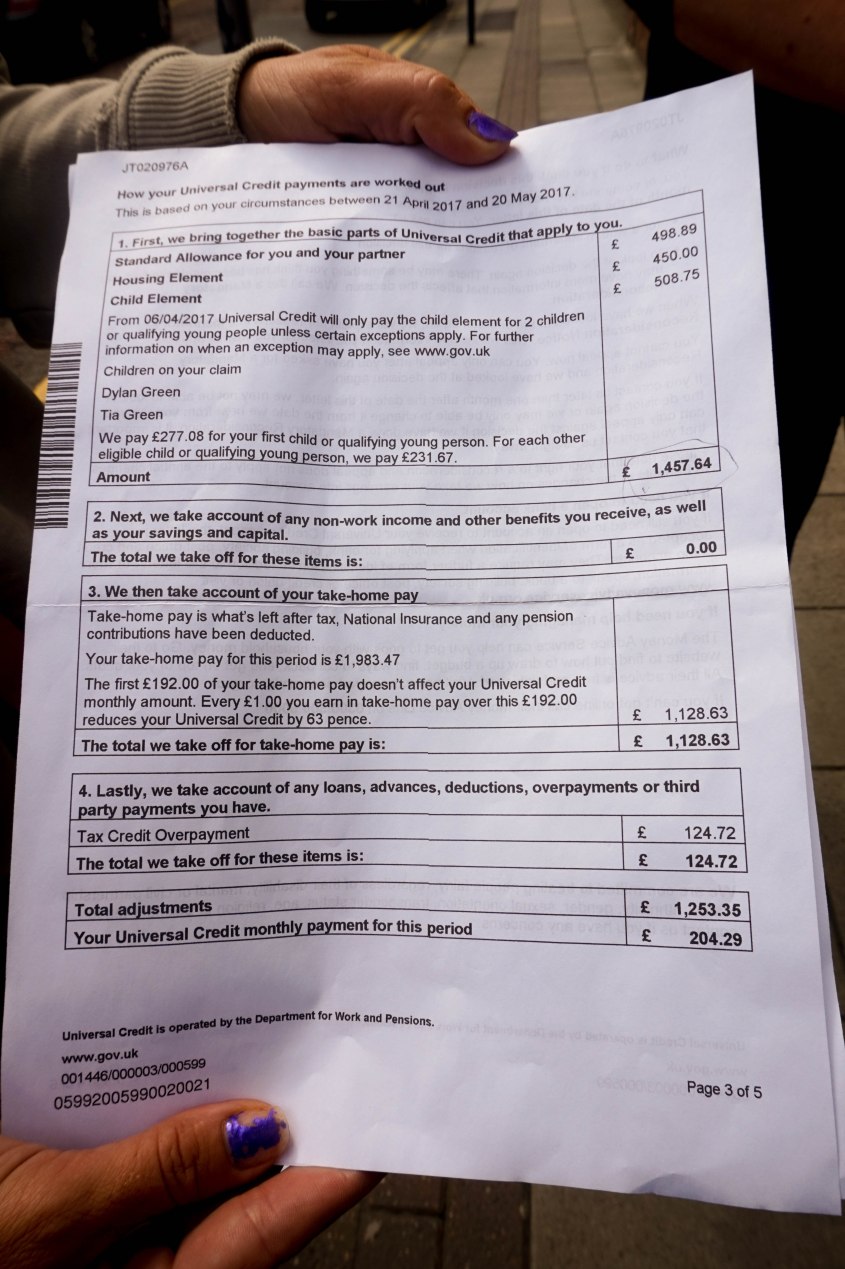 For anyone not understanding the above photo, the amount of money that this lady is left to live on is at the bottom. She is not living on an absolute fortune, and is only just surviving. The way that Universal Credit is caluculated is complicated, and is far to hard to explain on here.

We spoke to a man who’s also living on a zero income. He has had to make a new claim, and because he has educated himself to how the system works due to talking to us, he will survive. He will get a food parcel next week.

His story was that of his brothers. He is living on next to nothing because he is a new Universal Credit recipient. Because he had a loan taken out before he received his first payment he now has to pay it back. His situation is that his brother and his friend are now trying to share gas and electric, food etc. They are having to live in each others houses to be able to have electric and gas facilities. How awful is this. On top of this they are scared of the local housing association finding out. This is pressure that they don’t need.

We spoke to our friend, a man who we had helped for a long time. He is now receiving his work related pension, so isn’t struggling. He looks like a different person. The stress has disappeared from his face. But he still comes along to say hello. How lovely is that.

I spoke to a homeless chap that we had been helping. He happily told us that he now has somewhere to live. That’s a massive weight off my mind and I’m so happy for him.

There seemed to be a lot of external organisations entering and leaving the Jobcentre today. One organisation, told us that he ‘helps’ people, although he had no idea of the plight of the jobseekers that they are supposed to be ‘helping’. No surprise there though is it. It’s all about the money isn’t it.

It was busy today, we spoke to lots of people, all either angry, upset or zoned out. Almost every single person that we spoke to had no money, or a very minimum amount of money, hardly enough to get by. We shouldn’t have to live like this.

It’s a culture of fear, and we have seen this for many years now. So yes it does get stressful, and these demos have certainly changed my life.

Today was also good though. Lots of comrades arrived to help out, and that really cheered me up. I love the team, they have helped keep my spirits up so much. They also help the people having to use the Jobcentre so much. Numbers were high and it was good! Thank you everyone! And thank you so much to our first time attendees! True solidarity in action. Thank you. 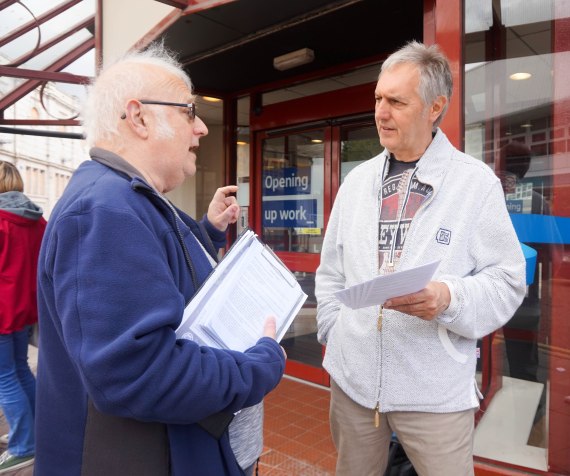 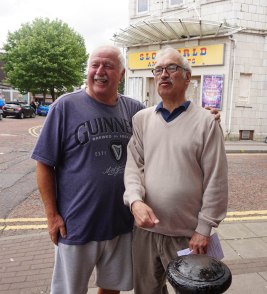 Many, many thanks to all my readers, supporters and everyone that sends me messages of support. When I say that it means a lot it really does.

Running this demo, writing the blog, and all the work that goes along with that has become a full time job. I can’t stop this campaign, it’s so important to so many people. But it is difficult.

Please can everyone reading this blog share it and talk about it?

Also I’ve placed a donation button below. If anyone would like to contribute I would be so grateful. It is a full time job for me and it does get stressful. Thank you so much!
http://www.paypal.com/cgi-bin/webscr?cmd=_s-xclick&hosted_button_id=K47PHPHS5XYRC&#8221; target=”_blank” rel=”nofollow noopener noreferrer”>