As I arrived on this cold Thursday morning I was greeted immediately by a group of people that had been gathering across the road waiting for the food parcels to arrive. They were slightly anxious, and this is why its important for myself not to be on my own.

Because it was cold and miserable the mood sort of reflected that. People using the Jobcentre almost running in and out, most likely afraid of being late, afraid of being sanctioned.

The mood of apathy filled the air though. Most people forced to use the Jobcentre are resigned to the fact that they must not deserve anything at all in life. They even tell us this. Some say that they ‘shouldn’t’ have something for nothing’ even though they aren’t receiving their social security for nothing because they have already paid into the system.

Years of marginalising the poor and targeting them with every obscene cut from this Tory government has certainly taken its toil. It’s evident just about everywhere in my town Ashton Under Lyne, just as it is in many other towns up and down the country.

We, however have a slightly different angle on this though. We were one of the first to trial Universal Credit and as a result Ashton Under Lyne Jobcentre is a few years ahead in both the harsh implementation of Universal Credit and the extremely harsh treatment metered out to claimants.

Here’s some of the personal stories that were told to us today. These are by no means unusual.

A lady that should be receiving her government pension, but now unable to do so thanks to the changes implemented by the government.

A  young mum with her baby, struggling on Universal Credit.

A disabled couple failed an ESA examination, but not advised on what to do next.

Man still waiting for his Universal Credit payment. Is hoping that he receives it next week.

Homeless man, fallen out with his friends just wanted a chat.

A lady who’s far too ill to be signing on advised by us to make another claim for ESA.

A man who had just filled in his own PIP form, is hoping to receive his money, but in his own words isn’t hopeful because people dying can’t get their ESA.

A man forced to do workfare at B&M four days a week. He’s very frustrated and is living from our weekly food parcels.

Many people just rushing in and out heads down to the ground. Not wanting to engage with anyone.

The list goes on and on. As will our demonstrations. Our new leaflets are proving to be extremely popular and I know that they will help a great many people. I also handed some to some local groups and will be continuing with this tomorrow and next week.

As for me, I haven’t really stopped. I had to return home early after the demo because I was too tired to hang around like usual. I’ll hopefully feel better later. 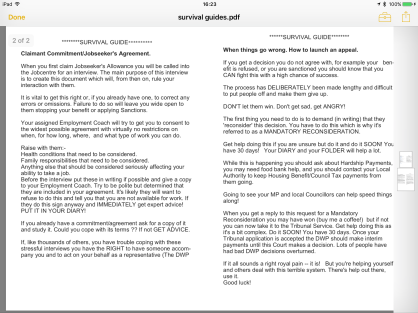 Many thanks to everyone that attended out of their own free time. I really do appreciate this. You are amazing.

Many thanks to everyone that supports the campaign and myself personally online. You are all a massive tower of strength. I still cant believe that I’m still having to do this over three years later.

Please share if possible, also please donate if you can. This has turned into a full time job for myself now, and to say that it’s not easy is an understatement. Thank you!