At last the weather was a lot warmer and more bearable, at last I didn’t have to wear my thick winter coat today. This is also a welcome change for the people that have to use the Jobcentre. I’m sure that they will be appreciating this.

I arrived with a comrade John, and we began to set up for todays special event. Like always I never knew how many people would turn up to support us, if indeed any. But I was pleasantly surprised. I think that around 15 people came to show their support which was fantastic. As soon as we arrived, so did the food parcels. Five arrived from Pauline and four didn’t even touch the ground, literally. Within half an hour they had all gone and I took a man to the shop next door for some much needed food. 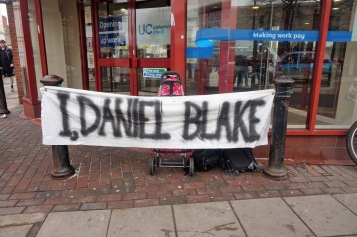 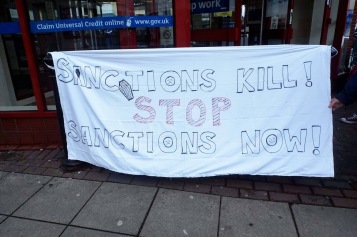 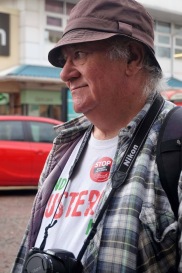 The troops then arrived from Glossop. They are amazing. On a map it might not appear to be too far away, but in reality it is quite a long drive. They had brought some big bags of food with them, I think there was around 4 and we handed them out straight away.

I really appreciate the Glossop Gang doing this, as they were going on to hold their own day of action after they had visited us. Thank you! 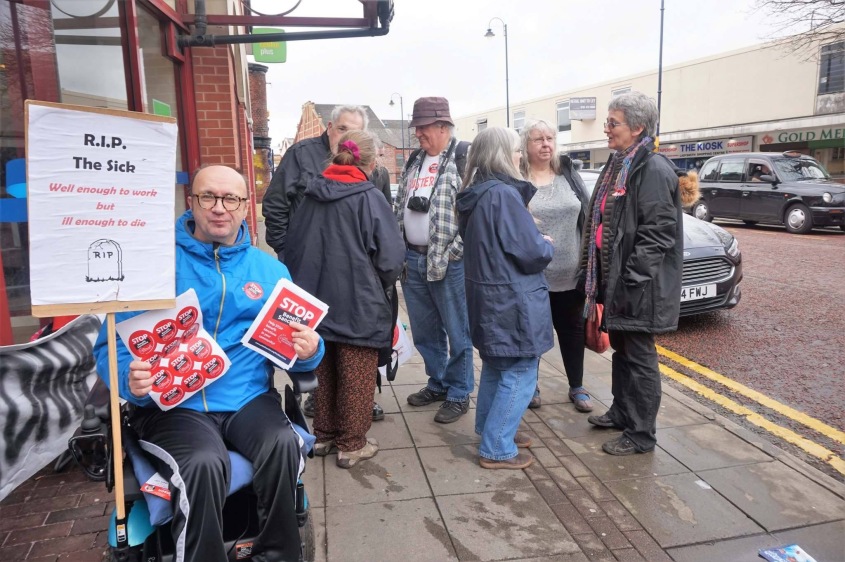 Like I’ve said before, we never know what to expect, and the need for food parcels this week was unprecedented.
I spoke to quite a few people that had been sanctioned, or have been told that their sanction will be implemented the following week. It’s awful. These aren’t just single people, they are people with families, pregnant ladies and women that should be enjoying their retirement but are unable to due to the changes in the state pension for women. It’s appalling.

We spoke to a lady whom seemed rather confused. She said she is claiming Universal Credit, and said that it is wonderful. People, according to her, shouldn’t get something for nothing. However she has never been sanctioned yet, and she thought that it was ok for the DWP to treat people like rubbish.

Her only complaint, it seems was that the frontline staff in the Jobcentre are “Horrible”. She couldn’t see that they are part of the system created to humiliate and degrade her. She walked off, but we did tell her that we would be there to help her when she encounters any problems.

Despite all this and more, the solidarity today was amazing. We could feel it, and to know that lots of other groups of people would be protesting outside other Jobcentres and DWP related buildings up and down the country today was amazing. However, I would love it if more people did weekly demos. A big shout out to those that already do.

Many thanks to everyone that supports my blog and the demos. It really does mean a lot. You do make a massive difference. We will hopefully have copies of our survival guide available soon. When they are available I will share on here for anyone to use. I ask only one thing though, that you attribute our hard work. Thank you.

I feel very proud that as a group we have been able to continue our campaign for so long. I do feel that this is do to the comradeship and the determination of us to make a difference.

Thank you once again for supporting both myself and the campaign.  You are ALL amazing.

Want to support this blog? Please share as widely as possible. I run my blog on a shoestring and it can be a struggle. This campaign has become a full time job for myself. You can donate using the button below.