Being a disabled claimant is hard enough, the whole rigmarole of trying to ensure that you get money to live on, money that you deserve is unbelievably hard. Not happy with the methods that they already use to stigmatise ill and disabled claimants they have decided to go one step further.

At first I read this and couldn’t quite believe it. In essence they have recruited an agency to take part, alongside the DWP in what can only be seen as interrogation tactics, or methods used in police stations when interviewing possible criminals.

A claimant will be told to attend an office for an interview, as we know these interviews aren’t voluntary. If you don’t attend then it gives them the option of punishing you, usually by stopping your only source of income.

From what I have read a claimant will be asked to enter a room which consists of walls where mirrored glass or the like are being used. The interview will then be watched from behind the mirrored glass in the adjacent room. It says that claimants are supposed to be informed of this happening, but do they? The DWP have been less than forgoing with their honesty and cannot be relied on for telling the truth.

Here is the link to the advertisement for the tender for the position.

To add insult to injury the winning tender has been awarded £60,000 for undertaking this work. Seems like there’s a never ending money pit to fund the ill treatment of claimants, both disabled and non disabled and their carers.
https://www.contractsfinder.service.gov.uk/Notice/3653b606-2d53-4031-ae5b-ec6e38c59f10

This is particularly disturbing. Why would they want observe claimants in this way? Claimants who are acting lawfully and whom are the most vulnerable in society?

I can only sumise that this will be used to both further intimidate and also to take notes both on body language and physical communication in such a way that can be used against them. Why hide behind a mirrored screen? Why drag claimants and their carers in for these interviews if it isn’t to try and put them off from claiming the money that they need to survive? 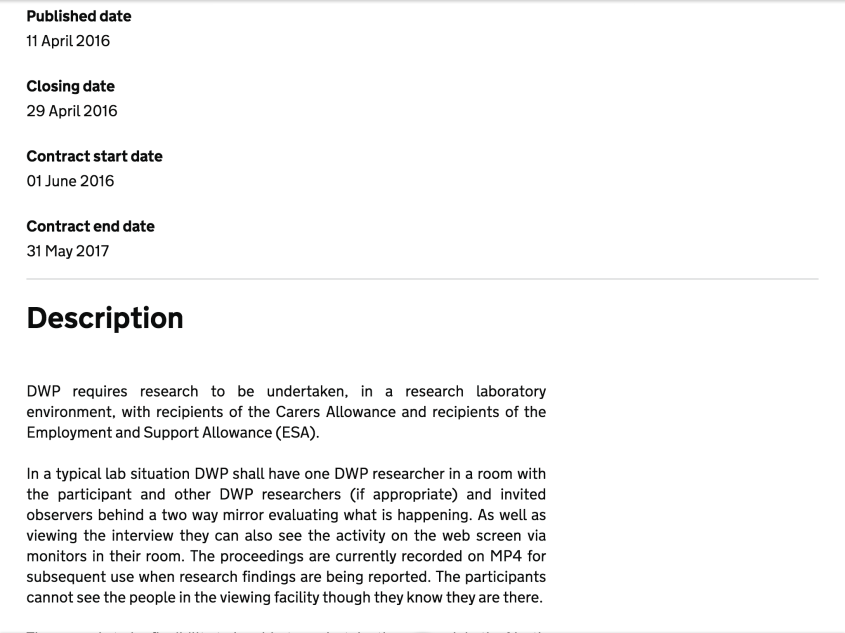 We should be outraged at this, and in my eyes it is a step too far.

Please share this widely for me. Claimants should not ever be experiments in their evil DWP laboratory.

They are based in Manchester, once again in the North West of England. But of course they aren’t biased towards northern people………..
Northern Voices T/A The Talking Shop
Supplier’s address
87-89 Chapel Street
Manchester
England
M3 5DF

44 thoughts on “The DWP takes a rather sinister stance on disabled and non disabled claimants. Provision of Research Lab Facilities for DWP.”