When is Workfare not Workfare? Well it seems that The Salvation Army Ashton Under Lyne doesn’t like to use the word, but is very happy to use workfare “volunteers” sent over from the Jobcentre.

The Salvation Army is now becoming less known for its Christian acts of charity, but far more well known for their exploitation of the poor and the vulnerable. I’ve been keeping my eye on this charity shop in my local town, and have questioned quite a few of the workfare “volunteers”. Not one of the people employed there on a workfare placement are happy. They feel exploited, used. They have to work very long hours, one told me that they have to work 30 hours and in their words aren’t treated nice at all. They are treated differently than the few paid employees there, and the work is hard. On top of this they have to complete their job searches, which can be as much as 35 hours on top of their workfare hours. The 35 hour job search isn’t legal but this is what certain advisors tell their claimants.Its appalling that they are being treated in this manner, but they have been questioned last week about their actions by the unlikeliest of people, a “volunteer” sent over by the Jobcentre.

The person shall remain nameless for fear of repercussions from the DWP.

They quoted “I was told to go to the Salvation Army to volunteer as part of the Workfare programme. I didn’t want to go, because I deserve to be paid to work, rather than slave for nothing. When I arrived they said that I had to fill a form in. It was a regular form for volunteering. I questioned this as I had been sent over to complete a Workfare placement and there should be official paperwork to complete. I’ve had to  do workfare before so I know how it works. They said just fill this form in. I questioned this again, because I need absolute proof that this will provide evidence of myself taking part and attending. They then started getting agitated, and said that they don’t want to call it workfare so just fill the form in. I refused, I do not want to take part in the workfare programme here. I’ve been told its horrible there and I know that The Salvation Army have been exploiting many people in this way. They are supposed to be a caring Christian charity! I telephoned my Jobcentre advisor who also seemed confused as to why there wasn’t any correct forms. I also stated to them, that because I haven’t signed any official DWP workfare forms, then I cant be contracted to them. The manager then got angry, stating that they didn’t like me using the word Workfare in front of customers, and they asked me to leave. I’m now waiting for another placement.”

The Salvation Army are well known for being an exploiter of unpaid workers from the Jobcentre. Avoiding the usage of the word in their shop will not stop their reputation from being damaged, it already is. Their views about other issues are also terrible.

This charity shop doesn’t benefit the local community. No jobs are created, the goods for sale are expensive, and donations received in the shop are sent to other areas which is commonplace within the corporate charity shops way of doing things. I already have stopped shopping there, indeed I did many years ago.

What we need to do is to support small, local charity shops who do benefit the local community. Many of these don’t employ workfare volunteers, and the owners do not receive massive wages.

Please look at Boycott Workfares website they have a list of workfare employers to avoid. Remember, for each workfare employee employed, a paid employee potentially, and often does loose their paid job. Why pay someone when they can get someone to work for nothing, and get a nice sum of money from the DWP. 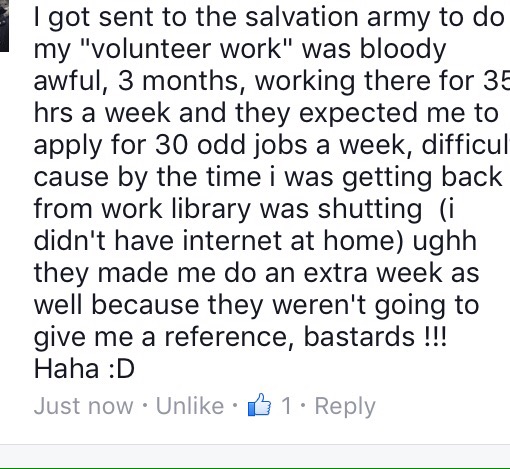 To avoid confusion I can only act and write upon information given. If the claimant doesn’t know the name of the scheme they are forced on then I can’t state it. I don’t have an office and I write this blog alone. I can  state what is lawful and unlawful though. I’m also not responsible for the DWPs actions, nor can I answer for them. If I have a relevant link to share I will share it. But remember claimants allow me to share their experiences because I promise complete confidentiality. Being anonymous is very important to them. Sorry if you don’t find my blog good enough or not full of links. It’s a blog about first hand experiences and links are provided when necessary. 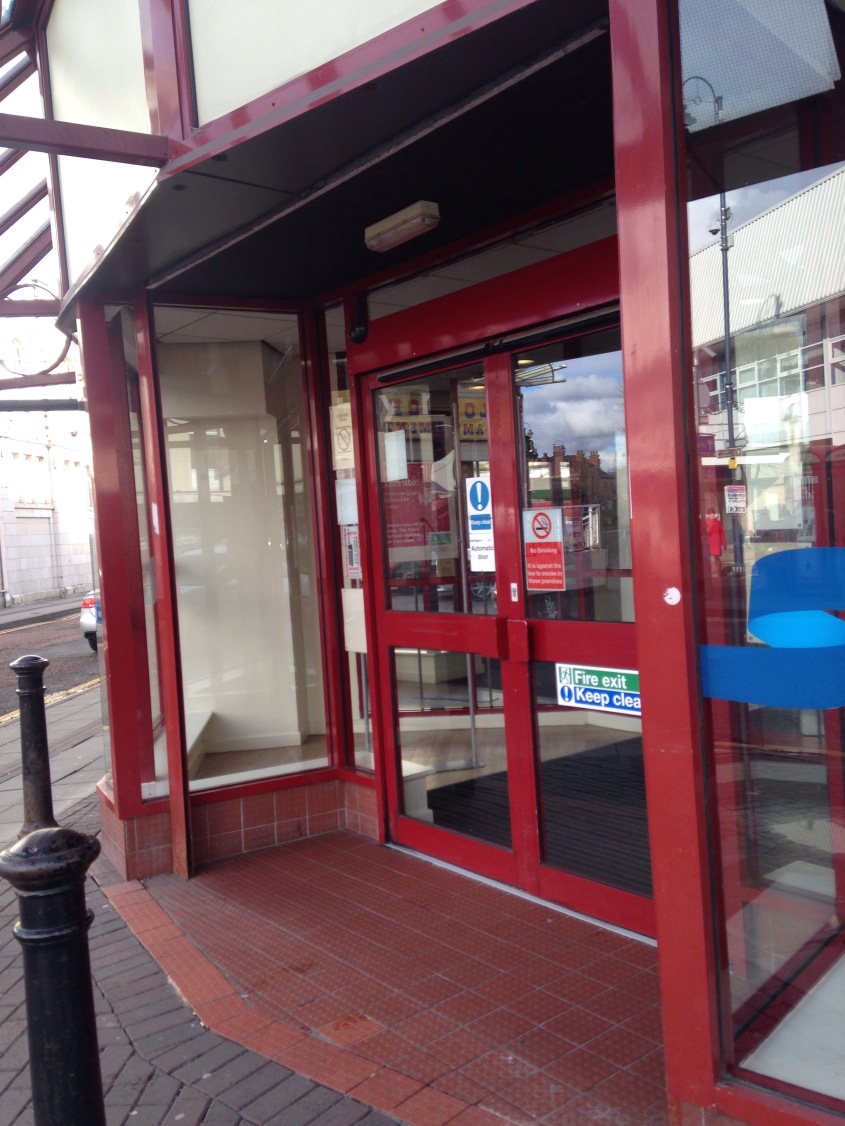 This work is licensed under a Creative Commons Attribution 4.0 International License.

13 thoughts on “The Salvation Army Ashton Under Lyne denying Workfare whilst recruiting a workfare “volunteer”.”