This week we had the budget and we weren’t expecting it to be a good one. It has specifically targeted the poorest in society and women with children. George Osborne announced that he was introducing a living wage of £7.20 a hour rising to £9.00 by 2020. This was the first lie. It’s not a living wage it’s just an increase in the minimum wage made to sound better than it is. This doesn’t include any pay increases for under 25s. He doesn’t think that they are important enough to be paid a decent wage. That in itself is shocking but I will start with tax credit changes..

If George osbourne had stood in parliament and had announced that they were officially ending tax credits there would have been total outrage. Instead he has implemented several things that will make it very hard to claim tax credits and if you manage to then you will certainly not get enough money to feed your children. Here’s a quick summary of it.

There is a little clause in the two children only new tax credit ruling. If a child has been conceived because of a rape then it’s up to you to prove it.. Angry? I am this is obscene.

I found this illustration online. I’m not responsible for it but it does add up. 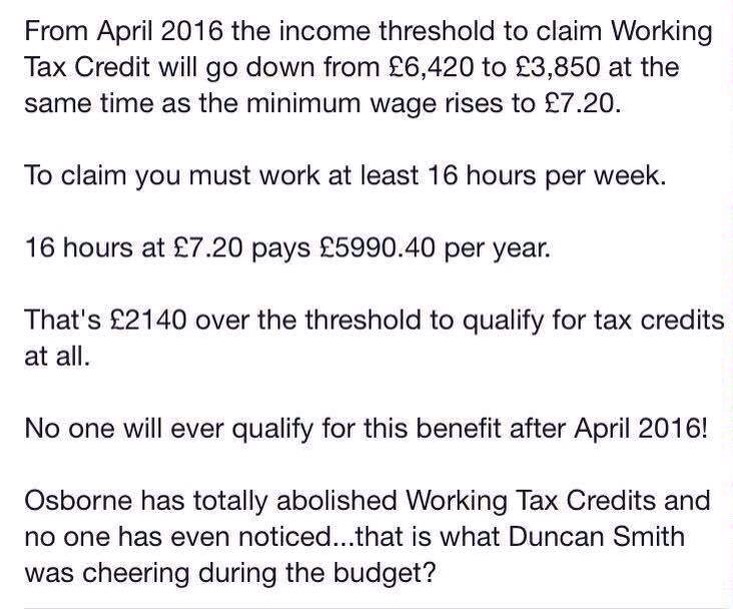 Now let’s talk about childcare… Some people will be rejoicing at the 30 free hours that you will get for 3-4 year old children… Don’t be fooled. This government already wants you to be working two jobs, on a constant treadmill of work and never seeing your children. This will most likely coincide with the lowering of the age limit on looking for full time work on income support. You will be moved from the much safer income support and onto either universal credit and JSA. Make no mistake the plans for this are in motion. Work more, contribute more for a pittance and never see your children. I’m a firm believer that children need to have a good strong loving relationship with their parents. This will be made far harder.

No automatic housing benefit for 18-21 year olds. This will mean mass homelessness as there are often very good reasons for young people to be living away from home. This will devastate young people at the very start of their life’s.

They are freezing working age benefits for 4 years… Nice touch… Everything gets more expensive so in essence the poor get much less.

Benefits being capped at £20,000 (£23,000) in London. This is shocking. There is a huge amount of blended families in this country and often they have more than 2 children, this is going to affect everyone who is on a low wage as well.

ESA will be cut.. Shocking. This is a lifeline for the ill. They really want them to suffer for their illnesses.

The buy to let of housing association properties has been given the go ahead… This means even less social housing which is desperately needed.

More devolution for Manchester. We don’t really want it we weren’t consulted. We are demanding a referendum as is our right.

Maintenance grants for students are going to end from 2016/2017 and are replacing them with loans to be repaid once your salary reaches more than £20,000. Students aren’t happy this was a lifeline for families who cannot afford to pay to go to university. This will ensure that only the rich get educated. Disgusting.

More encouragement to employ apprentiships… Yes this works because companies can legally employ a young person on the pretence of an apprentiship but pay them a very very low wage with long hours. Young people deserve a proper wage like anyone else. We need to stop this exploitation!!

I could go on forever but I won’t. What you can see is the poorest being targeted and the richest being left to their own devices.

The idea of this budget is to get the poorer so low so demoralised that they won’t fight back. But we will. I’m poor and I’m fighting. We all need to. Incidently it’s not a coincidence that they have changed the definition of poverty just before this budget. I’m sure this will have broken many basic human right laws. This is why we have them, and this is why they want to end them.

I run this blog on a shoestring and I would love to keep it going. Please donate to help keep our campaign going. We work very hard at this and it has become more or less a full time job for me.

8 thoughts on “The end of tax credits implemented in a typical twisted  Tory way. Shocking. ”