Yesterday was the national day of demonstrations against sanctions organised by unite. We of course have been doing these demonstrations every week since August. August was the turning point for us, we saw how inhumane these sanctions were and we were determined to do something about them. Sanctioning a pregnant lady for no legal  reason and then saying when she asked how she would feed her unborn baby “tough your not Ill you are pregnant get on with it” still haunts me.Without the help that she got both her and her unborn baby could have been yet another statistic for this government to use in their “return to work” statistics. Make no mistake the Jobcentres aren’t there to find you work anymore. Unlike the old days. They are now used to take people off the unemployment register in any way possible. It doesn’t matter how. Then this cruel government can say that the unemployment figures are down. The truth of the matter is is that they aren’t down. They are higher than ever. People forced onto workfare or the work programme are taken off the unemployment figures amd the companies concerned get a nice sum of money for this pleasure. Workfare is another evil. It takes away paid employment and replaces a fully paid job with someone working for nothing. They make false promises of “you might get a job at the end of it” but that is very rare. Why? It’s simple. Why pay someone when you can get someone to work for nothing. Some people go into these workfare positions with hope… But that soon goes when they realise that they were being used. Does it make them feel angry? Yes it does and they are right to be angry. Does it make them feel like giving up? Yes it does.. You loose all self worth. You know that you are being used. Then the Jobcentre blame you for not getting paid employment. Even though it’s not your fault. You did your best to gain employment but the intention was to never give you employment. The Jobcentre then punish you with attending the work programme again, where the company receives a large amount of money for you attending. The longer you are there the more money they get. When you don’t find employment through them they will then put you on a gruelling punishment of daily signing on appointments. Taking away your prose and the ability to look for real work. A young man I spoke to yesterday who had always had a very good job and has a very high IQ said “I’m angry because they are treating me like an idiot. They want me to do things that Im overqualified for. It’s so frustrating.” They want you to be completely controlled by them in such a way that your life isn’t your own.

Another young girl the same age as my daughter came over to chat with me with her boyfriend. They’ve had no money since November and are relying on the one homeless facility for food. They look so thin and sad. They are only starting their life’s and shouldn’t be like this. I really hope that we can help them in some way. I’m still hopeful for them. I have to be we can’t give up hope.

We also got some very bad news. The PCSOs that we talk to on a regular basis had just got back from an incident where a man had tried to hang himself. He attends Ashton Jobcentre and we probably know him. They aren’t allowed to say much but you could see the shock in their eyes. We hope that he recovers. It really upset us all. Will the Jobcentre take responsibility for this? No they won’t. Of course they are only doing their jobs. I say again I know where ive heard that before.

It was vey uplifting to see all the demonstrations up and down the country yesterday. We now know that people are in solidarity with us. For a long time we have felt alone in our quest to highlight how wrong sanctions are. And there were some fantastic demonstrations. I heard a comment yesterday that someone was disheartened because lots of people didn’t turn up. We don’t get lots of people except on special demonstration days that I create. It’s not about numbers it’s about quality. About you being there showing support to the claimants inside the Jobcentre. They have hope that there is someone outside that cares. It keeps them going. Even if it’s just one person protesting it’s enough. Don’t give up more people come the longer you are there.

Why is this so important to me and my group? Because it is wrong and I personally aim to change it. We have put pressure on them to change this and we are making a big difference. But we are no threat. We are peaceful.  And many many thanks to everyone up and down the country for showing solidarity with us. Many many thanks to unite in the community for arranging this day of action. My union rep a lovely chap said ” I don’t know how you do this every week” I replied because we have to. We’ve got to make a change. It’s become part of our life’s, and a part of our life’s that we are very proud of.  Thank you everyone so much. ﻿ 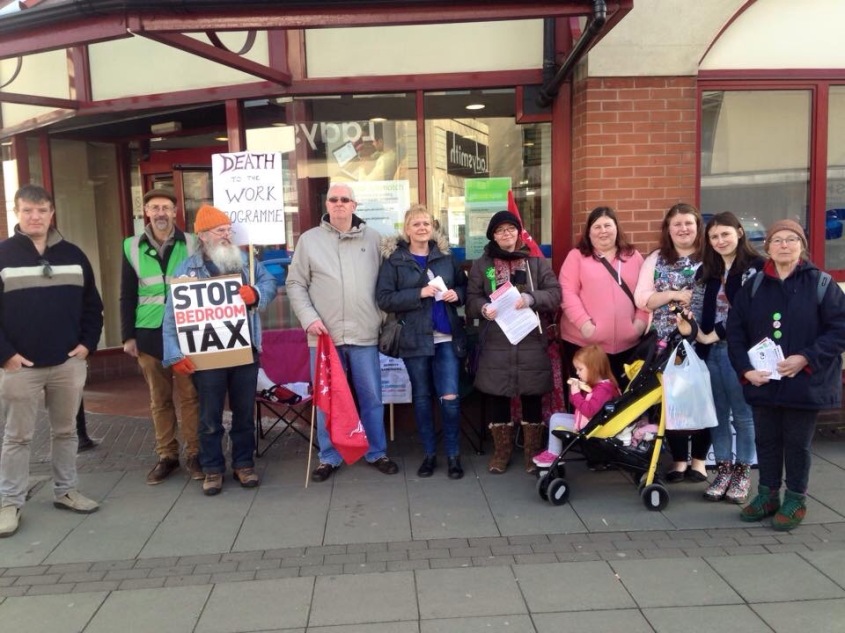 ﻿    Keeping this blog and the Jobcentre demos is very hard work and time consuming. It’s taken over my life. I’m trying to put a donate button on here but I’m struggling with this. I need to pay for my internet to keep this going and a donation however small would be so fantastic. If anyone could help me with setting up a button on here please message or comment. I do have a PayPal account also. Many thanks I would love to continue blogging and writing it’s become my whole life and will be so until this evil stops!

11 thoughts on “National day of demonstrations against sanctions and attempted suicide by man who attends Ashton Jobcentre.”